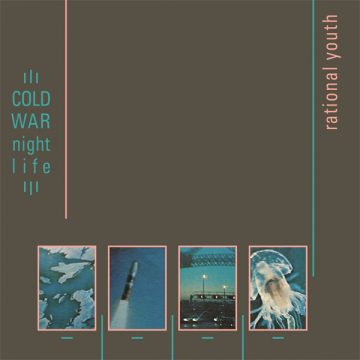 Cold War Night Life was originally released in 1982 and was the debut album for Montreal’s Rational Youth following the release of a couple of singles, both of which would wind up on the album. It became the must have album of 1982, if not the entire decade, and also, very quickly, achieved the status of classic album. But because it was on an independent label (YUL Records), it was not easy to find and eventually became highly sought after. It briefly appeared again in 1987, but after a couple years, with EMI dissolving, it disappeared again. Here we are in 2019 and this time through the fine folks at Universal Music Canada it reappears, with bonus tracks, and this time also available on vinyl. Cold War Night Life was unlike anything that came out of Canada at the time because these guys used electronic instruments while coming up with incredibly strong melodies. Not only could you dance to the stuff, it burrowed into your ear and stayed there. And I was happy to have the music playing  in my ears.

As for this re-release, this album has never sounded better. The album has been cleaned up, yet retained its original warmth. How the hell an early 1980s synth band created a warm album with just synthesizers is beyond me but they did it. The classic songs are all here in their original album form. “Saturdays In Silesia”, “Dancing on The Berlin Wall”, “Just A Sound In The Night”, “City Of Night” and as a bonus track, the wonderful “I Want To See The Light”, a song that is incredibly beautiful with wonderful lyrics.

The other bonus tracks are all welcome additions, but really, the original album alone is worth the price of admission alone. Sure the remixes of “Saturdays In Silesia” and “City Of Night” are great, as is the French language version of “City of Night” (“Cite Posphere”) but just the original album would have been enough.

Cold War Night Life was a game changer in the world of electronic music, especially in the early 1980s. Rational Youth proved that a synthesizer, loops and drum machines were viable instruments to create some damn catchy, well produced and beautifully arranged songs. The album is near perfect with not a wasted moment. From beginning to end Cold War Night Life delivers danceable pop songs that cry out to be heard again and again.

I am glad Cold War Night Life is back again. It is an influential album that can be heard in many other bands throughout the years. It is nice to have it intact and in one place. The packaging is great with photos and Tracey Howe’s liner notes.  A fantastic rerelease.

Born and raised in Whitby, Aaron discovered music through his love of The Beatles. This led to a career in radio, writing for various publications, and ultimately a radio show about The Beatles (Beatles Universe), which ran for over four years. When not immersed in music, Aaron enjoys spending time with the loves of his life -- his wife Andrea, and daughters Emily and Linda (all of whom have an intense love of music too).
RELATED ARTICLES
album reviewalbum reviewscold war night life
8.0