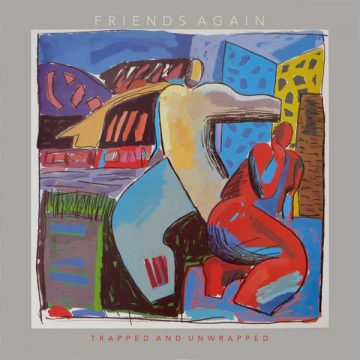 This re-release is ridiculously overdue. Friends Again released their one and only album in 1984, Trapped & Unwrapped: Collection. Since it was released on CD in 1989, it has all but disappeared from stores but not from the fans’ minds. Now it has finally been given the expanded treatment and I am so glad it is available again. Friends Again became big news again in 2019, 35 years after their debut album was released.

The thing is the album has not aged. It sounds as good today as it did in 1984. It is not that the album was ahead of its time, but rather timeless. The songs found on Trapped & Unwrapped: Collection are extremely well-written and well-produced songs, thanks to the wonderful producer Bob Sargeant. The songs fit together to form a near-perfect album.

For the uninitiated, Friends Again were a pop band from Scotland, but branding them pop is selling them short. They created their own distinct style using an almost classic beat group arrangement at a time when synths were dominating the charts. Friends Again went for acoustic guitars, orchestral arrangements and stellar harmonies. The end result was a fantastic album, full of very original songs, that became somewhat addictive.

Sadly, after one album, the members of Friends Again went their own separate ways. This was a real tragedy, as I believe had they stayed together they would have continued to make their own distinct brand of pop music. Over the years, it has gained an almost mythical following. People had heard of it, but not heard it. Well, now is your chance to hear the album and more and see what all the fuss was about.

Trapped & Unwrapped: Collection demonstrates how to put together a re-release, jam-packed with brilliant B-sides, demos, and other unreleased material. This is a fantastic re-release of a fantastic album.

Born and raised in Whitby, Aaron discovered music through his love of The Beatles. This led to a career in radio, writing for various publications, and ultimately a radio show about The Beatles (Beatles Universe), which ran for over four years. When not immersed in music, Aaron enjoys spending time with the loves of his life -- his wife Andrea, and daughters Emily and Linda (all of whom have an intense love of music too).
RELATED ARTICLES
album reviewalbum reviewscherry red records
7.0