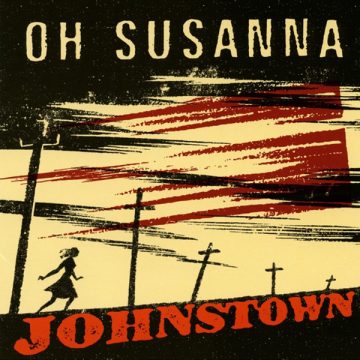 My first foray into Suzie Ungerleider’s catalogue of pretty and dark country pop was her second full-length, Sleepy Little Sailor. I remember playing that album often, loving her tough-as-nails voice and approach to laying out soberingly beautiful songs. Eighteen years later I am delving back into the folds, specifically Oh Susanna’s debut titled Johnstown.

Marking the 20th anniversary of this first full-length release, Johnstown has been remastered and fitted up with a few acoustic variations. Issued first as a limited vinyl release for this year’s past Record Store Day, Johnstown certainly does not feel out of place by today’s standards.

Suzie’s voice is like thunder dipped in honey. The song arrangements are tough as a turtle shell, but with a soft belly. Barely any of these songs are as romantic as they initially sound; instead they play on the weakness, frailty, and darkness in humans. While there are crooner tales of love lost, soaking in regret and what could’ve been, there are also tales of people pushed to the edge, and maybe even a bit of serial murder and a perpetrator’s wish for atonement.

The opening track, “Johnstown,” loosely mentions the great 1889 flood in Johnstown, Pennsylvania, but it is soon apparent that this song speaks of a much more insidious topic than waters rising… although people do take their final breath in both accounts.

“The Bridge” is my personal favourite, and although it offers some sweet sounds, the content once again explores unholy places. Here in particular: a woman trapped in a bad marriage.

It’s said that a 20-year wedding anniversary merits the gifting of china, and while this may not be a wedding, it is an anniversary, and perhaps the fragile stuff ought to be protected anyway.

Johnstown may resonate sweetly, but its content is the bull who will upend every plate in the house and remain unapologetic.

It took the recommendation of a best friend to get me into the pages of music magazine writing. Armed with the deepest appreciation for all the music, a ridiculous sense of humour, and the apparent ability to string a few words together, these fingers started giving. Who knew it would become one of my favourite things many years later and that I'd enjoy seeing my works published the world over?!
RELATED ARTICLES
album reviewalbum reviewsoh susanna
9.0