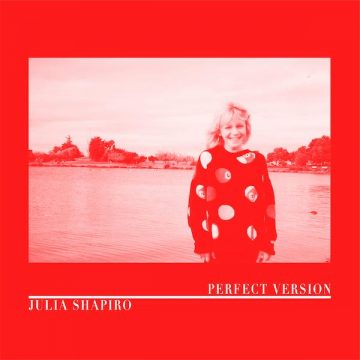 Perfect Versions is the debut solo album for Julia Shapiro, lead vocalist and guitarist of Chastity Belt. The 10-track album takes listeners on a journey of love, loss, pain and nostalgia as we listen to Shapiro gain control of her music and ultimately her life.

After a breakup with her partner, health issues and a cancelled tour with Chastity Belt, Shapiro began working on her debut album.  The result–a moody sound, heavy on the melancholic vocals; a dream-like exposition that hardly ever breaks its form.  This album is like a rainy day, sometimes you want it to rain but sometimes you need sunshine.  While the album rarely strays from the scope it sets out, it makes its point clearly; it doesn’t have any answers, mostly introspective questions with no resolve.  Frustration and searching seem an inescapable theme, whether or not intended, the listener will find themselves shoe gazing almost the entire album. Perfect Versions however, does have a few moments of sunshine namely the aptly titled “A Couple Highs” which break the melancholic drone just for a moment.

Shapiro’s dreamy voice delivers truths in a beautifully painful way. “How can you love yourself so damn much, it isn’t natural,” sings Shapiro in “Natural”, bringing up conversations about selfishness and vanity. The guitars in “A Couple Highs” are twangy and highly saturated, reminiscent of ‘90s alt-rock band, Smashing Pumpkins’ earlier work. The guitars ooze atmosphere as a pastel scene is set in the listeners heads while they are taken through not only Shapiro’s journey of healing and self awareness, but their own.

Although at times the songs can feel a bit wandering, there is a point to be made and that being that sometimes there isn’t an answer; we are meant to go through struggles in life and become stronger because of them.

After borrowing her parents’ 35mm Yashica film camera and never returning it, Kristen discovered her love for photographing artists, particularly live performances. She spends her free time playing with her golden retriever and buying too many plants that she doesn’t have room for.
RELATED ARTICLES
album reviewalbum reviewshardly art
8.0