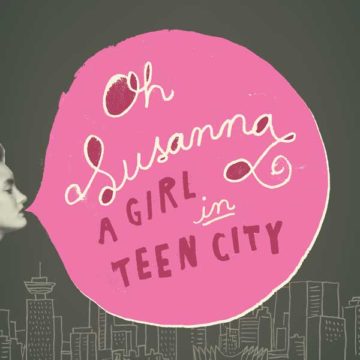 This album is a pleasant surprise.  When I read the description of the record, I was a bit worried it would be full of angst and be self absorbed.  I was wrong.  It turned out to be a pleasant, thought provoking, nostalgic, well-crafted album.

Oh Susanna is really Suzie Ungerleider, who performs and records under the name Oh Susanna.  A Girl In Teen City is her seventh studio album, and her strongest effort yet.

The album is about Ungerleider’s youth and her experiences growing up in Vancouver during the 1980’s.  As I said, I thought the album might not be something I would enjoy.  Again, let me repeat, I was wrong.

This is a well crafted album, beautifully produced and expertly played.  Ungerleider teams up with musician/producer Jim Bryson again (he worked on her last studio album Namedropper, 2014).  He also provides guitar and keyboards.  He knows how to get the most out of her voice and assists in arranging the songs to highlight the best aspects.  Listen to the sparseness of the “The Darkroom At The School” (which highlights drummer Cam Giroux).  But it is the layered instrumentation as the song builds that makes the song so  incredible. It is one of the many highlights of the album.

The other musicians contributing to the album include Eli Abrams (bass), Gord Tough (guitar), and background vocals from Holly McNarland, Gabrielle Giguere and Ungerleider’s sisters Jessie and Sofia.  The band plays together on this record as if they have been playing together for years, and provide a tight backdrop for Ungerleider.

While A Teen In The City is a nostalgic look at Vancouver, and very touching at times, it is not without humour. “Getting Ready” ends with the line “Whatcha going to do when your boyfriend is prettier than you?”  Also the tale of her tone deaf boyfriend (“My Boyfriend”).  It was the ‘80’s after all. But she paints a very real picture of the city and adolescence.  A rare talent.

A Teen In The City is summed up beautifully at the end with “My Old Vancouver” and is wonderfully descriptive view of the city as it was.  It feels like a walk through time to a different city with young people.  You did not have to grow up in Vancouver to enjoy this song.  And the simple acoustic guitar (which, I swear reminds me of Lennon’s “Working Class Hero” ) accompanies Ungerleider’s beautiful and emotion filled voice.

Born and raised in Whitby, Aaron discovered music through his love of The Beatles. This led to a career in radio, writing for various publications, and ultimately a radio show about The Beatles (Beatles Universe), which ran for over four years. When not immersed in music, Aaron enjoys spending time with the loves of his life -- his wife Andrea, and daughters Emily and Linda (all of whom have an intense love of music too).
RELATED ARTICLES
album reviewsoh susannastella records
9.0