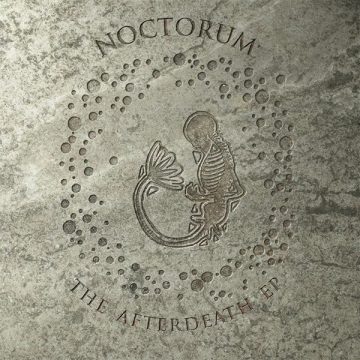 Noctorum consists of the duo Marty Willson-Piper (The Church, All About Eve, The Saints) and producer Dare Mason. In 2019, they released their fourth album, The Afterlife. To fund the album the band used Pledge Music. However, Pledge Music somehow collapsed and declared bankruptcy, leaving fans and bands holding the bag. Noctorum decided to honour those who pledged and continued on with the album, even though it meant a significant loss of revenue. This EP, The Afterdeath,  has been released to help the band recoup that lost money.

The Afterdeath consists of two original songs recorded during The Afterlife sessions, as well as two covers, “Nowadays Clancy Can’t Even Sing” (Buffalo Springfield) and “I Can’t Escape Myself” (The Sound). These covers are fantastic and the band makes them their own. One may be inclined to forget the originals and assume that these are original compositions by the band.

The other two tracks, “Dancing With Death” and “The Mermaid” are wonderful psychedelically- infused rock songs, complete with stirring vocals from Willson-Piper. “The Mermaid” is the standout track of the EP, with inspired guitar work and wonderful production.

The Afterlife charted on Billboard charts and was a surprise hit. It deserved to be, but it also meant a financial hardship for the band. Although the new EP is short with only four tracks, like a traditional EP, it is powerful, honest and really rocks. This is a band that has made four incredible albums and should be top of the charts everywhere. For now, we can dig the cleverly titled EP The Afterdeath, and look forward to more incredible music from Willson-Piper, Mason and Noctorum.

Born and raised in Whitby, Aaron discovered music through his love of The Beatles. This led to a career in radio, writing for various publications, and ultimately a radio show about The Beatles (Beatles Universe), which ran for over four years. When not immersed in music, Aaron enjoys spending time with the loves of his life -- his wife Andrea, and daughters Emily and Linda (all of whom have an intense love of music too).
RELATED ARTICLES
album reviewalbum reviewsmarty willson-piper
8.0