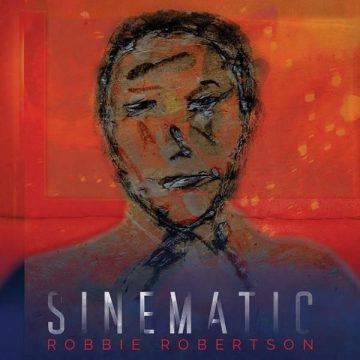 Robbie Robertson returns with his first album since 2011’s brilliant How To Be Clairvoyant. That is a tough album to top, but he has managed to do so with his sixth solo album, Sinematic. In the same way Paul McCartney’s Flaming Pie (1997) was a direct result of The Beatles Anthology, Sinematic is influenced by the recent documentary Once Were Brothers and his autobiography Testimony. Sometimes, an artist needs to look back to move forward, and here, Robertson has not only moved forward but  created what could be his best solo album. Robertson, also dipped into his ability to write soundtracks for this album ,as some of the songs will later be featured in Martin Scorses’s film The Irishman.

Robertson gets some help on the album, Glen Hansard “Let Love Reign”, Van Morrison “I Hear You Paint Houses” (the name of the book about hitman Frank ‘The Irishman’ Sheeran, and featured in the Martin Scorses’s film The Irishman), Citizen Cope, and DJ Howie B make appearances throughout. But Robertson is the star. His guitar performance is powerful, emotional and downright brilliant. His vocals are confident, passionate and effective throughout. His production is second to none. Sinematic is the perfect title for this album. Besides the obvious connections to movies, Robertson paints aural landscapes throughout. And the packaging is a whole other topic. It is a work of art.

The autobiographical “Dead End Kid” (again featuring Hansard, and yet another reference to classic movies) is downright heartbreaking and angry at the same time. This song is a perfect example of Robertson’s ability to write lyrics that resonate. “They said you’ll never be nothing/ You’re just a dead end kid/that’s what they told me, that’s what they said.” Over 60 years later, those words still sting for Robertson, and he has turned them into a wonderful, explosive song.

Equally interesting are the instrumentals on the album, such as the closing track, “Remembrance”, featuring the guest guitarists, Derek Trucks and Doyle Bramhall II. Again, a song featured in The Irishman, but here, it is the brilliant and most suitable manner to end the album. It allows breathing and an opportunity to meditate on all that has gone on prior to the song. It plays as a lament. A beautiful, melodic, sad lament.

Sinematic is well worth the wait, it is a work of art. Robertson continues to grow and develop as an artist. His soundtrack work, his writing and this album are evidence of that. Sinematic is just one example of Robertson’s incredible talent and ability to touch the human nerve. This is a near perfect album.

Born and raised in Whitby, Aaron discovered music through his love of The Beatles. This led to a career in radio, writing for various publications, and ultimately a radio show about The Beatles (Beatles Universe), which ran for over four years. When not immersed in music, Aaron enjoys spending time with the loves of his life -- his wife Andrea, and daughters Emily and Linda (all of whom have an intense love of music too).
RELATED ARTICLES
album reviewalbum reviewscitizen cope
8.0