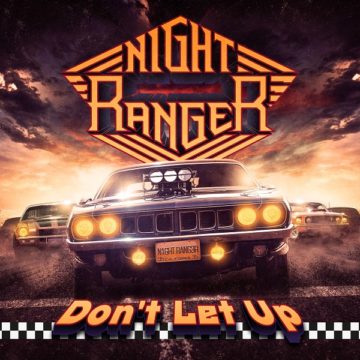 By my count, this is Night Ranger’s 12th studio album.  And to be very honest, they are not breaking any new ground with this one.  They have returned to a tried and true formula.

‘Something tells me you’re living with your past, running in circles, what is the point of that?’ sings original bassist and singer Jack Blades in the song “We Can Work It Out “ (not The Beatles song).  This song, the highlight of the album, demonstrates a band who knows their sound, their ability and their audience and are also aware that they do not need to change.

Don’t Let Up is a well played, beautifully produced, well arranged album.  The original three members of the band are augmented by two new members and they have come together to produce a Night Ranger album.

Night Ranger reached their commercial peak in the 1980’s and have gone through member changes, break-ups and reunions.  To their credit they have continued to produce well structured, if slightly formulaic albums that no doubt please the fans.

The problem is that they are not going to gain new fans with this album.  Some of the songs borrow from other classic ‘hair heavy metal bands of the 80’s. “Running Out Of Time” channels Van Halen’s take on “Pretty Woman” and at times this can sound somewhat dated.

Fans of American stadium rock/‘80’s heavy metal bands will love this album. It may even send people looking for their air guitar but the album does sound out of time and out of date.  The music is professionally and well played.

This band had several top 40 hits during the ‘80’s, their albums charted respectively during the same time period and they have a rich history to draw upon.  The power ballads seem to be disappearing, but they are dead wrong when they sing about “Nothing Left Of Yesterday” as they seem to be banking on yesterday and reliving past glories.  Nothing wrong with that, and they do it extremely well, it is just nothing new.

Born and raised in Whitby, Aaron discovered music through his love of The Beatles. This led to a career in radio, writing for various publications, and ultimately a radio show about The Beatles (Beatles Universe), which ran for over four years. When not immersed in music, Aaron enjoys spending time with the loves of his life -- his wife Andrea, and daughters Emily and Linda (all of whom have an intense love of music too).
RELATED ARTICLES
album reviewsfrontiers music srlnight ranger
8.0