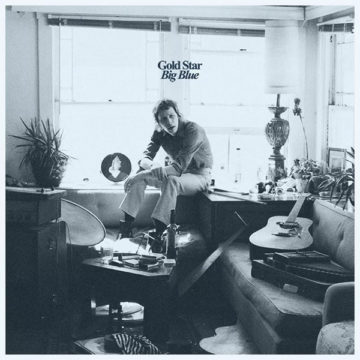 Gold Star, aka Marlon Rabenreither, follows up his full-length album Dark Days (2015) with his latest release, Big Blue.  The title is a nod to the ramshackle Hollywood home where he produced and recorded the album, but it also reflects the tones that saturate the record.  There is a world weary melancholy to the tracks, along with the occasional nod to the natural blues of the world, with songs named after blue moons and blue skies.

The singer-songwriter plays with the traditional folk and country evocations— the allure of the travelling troubadour bound to ever-shifting surroundings, with love and heartbreak on his mind.  “Blue Moon”, “It Ain’t Easy”, and “Deptford High St.”, are just a few tracks that provoke a sense of travel and longing with lyrics that speak to having someone on your mind, the sting of retrospection, and the uncertainty of what’s to come.  Moaning guitars, achy vocals, and a warm harmonica, infuse traditional standards with the fresh technique of a novel sound.

In “If Ever You’re Lonesome”,  the protagonist explores the challenges of reaching out to a former lover. “If ever you’re lonesome and I’m on your mind/If you just need someone, won’t you drop me a line?” This song reminded me of the complicated textures of Townes Van Zandt’s beautiful “If I Needed You”, (a songwriter Marlon has been compared to before). “If Ever You’re Lonesome” is a hard pill to swallow, a reminder of the irretrievable nature of love, and the complications of wishing happiness to a former partner, without holding them back.

That’s not to say that the record isn’t without levity. In spite of its name, “Sonny’s Blues” offers an upbeat pop infusion into Gold Star’s Americana sound.  In “Blue Sky To Blue Sky”, Marlon pairs with a female vocalist for a sound that is reminiscent of the sweet accompaniment so often brought by compelling harmonists such as Emmylou Harris.

“The Strangler” is the last track on the album. The love-gone-wrong bitterness, along with the simplicity and sparseness of the track, make for an honest grit that gets under your skin. “Will it ever be different? /I mean, baby, how could it be? /It’s not the first time I tried to leave.”