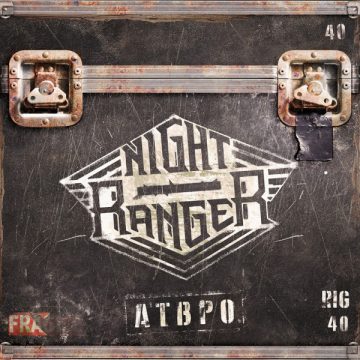 ATBPO (which stands for And The Band Played On) is Night Ranger’s 13th studio album, and for this one, their first since 2017’s Don’t Let Up, they come out rocking hard. From the opening track to the last, full metal is the order, with a couple of power ballads. For those who have not been keeping up with them, you might be expecting “Sister Christian” or “Sentimental Street” their biggest hits, from the mid 1980s, and you may be surprised because those songs do not represent what they are really all about. Especially ATBPO.

ATBPO opens with the extremely powerful “Coming For You”. The song explodes from the speakers, and the race is on. This is fast, hard driving heavy metal, performed with expert musicianship and well recorded and produced. This song sets the pace for the first half of the album, with a brief pause with power ballad — and highlight — “Can’t Afford A Hero”. Melodies and harmonies dominate this beautiful track. Another standard rock ballad is features later with “The Hardest Road”. They are not as successful with this ballad as they were with “Can’t Afford A Hero”, but they are smart in including the tracks to break the constant hard rock.

Night Ranger is very talented and rocks out as well as anybody. “Breakout”, “Lucky Man”, and the potential rock anthem “Dance”, are extremely well-crafted and incredibly energetic. Brad Gillis’ guitar delivery throughout ATBPO is absolutely stunning while Jack Blades’ vocals are as strong as ever. Along with drummer Kelly Keagy, Blades forms a formidable rhythm section that keeps pounding throughout the album.

Lyrically, survival, strength, and sometimes having fun are the order of the day and they fit the music perfectly. To their credit, Night Ranger pays a great deal of attention to the lyrics and structure of the songs. This is not just loud music coming at you but well thought-out and masterfully performed hard rock. ATBPO is a strong album that hard rock fans will absolutely love.

Collectors should note that there are various versions of the album on assorted packages and coloured vinyl.

Born and raised in Whitby, Aaron discovered music through his love of The Beatles. This led to a career in radio, writing for various publications, and ultimately a radio show about The Beatles (Beatles Universe), which ran for over four years. When not immersed in music, Aaron enjoys spending time with the loves of his life -- his wife Andrea, and daughters Emily and Linda (all of whom have an intense love of music too).
RELATED ARTICLES
album reviewalbum reviewsfrontiers music srl
9.0