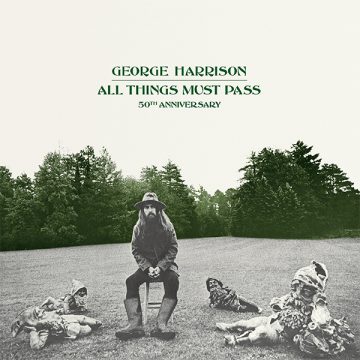 All Things Must Pass was originally released in November, 1970. It was George Harrison’s third solo album, following 1968’s soundtrack, Wonderwall Music By George Harrison, and 1969’s  very experimental  Electronic Sound. But, All Things Must Pass was also a very big statement. This was Harrison declaring himself a major force in music, and perhaps most importantly, an equal to Lennon/McCartney. He succeeded on all fronts. This was not only the first triple set to top the charts worldwide, it also earned Harrison rave reviews. It was all deserved and was an immediate classic.

For my money, All Things Must Pass is a perfect album. There is no argument.  Harrison knocked it out of the park with this landmark. It includes two studio albums, plus a third of in studio jams. Most of the songs date back to The Beatle days and The Beatles’ loss is Harrison’s fortune. One can hear The Beatles perform “All Things Must Pass” on Let It Be…Naked and Anthology III, but Harrison’s version soars. It also features a song he co-wrote with Bob Dylan, opening track “I’d Have You Anytime”. It is an interesting choice of an opening song, as it is a slow, moody piece. Although it is amazing, it goes against The Beatles’ golden rule of opening with a solid rocker.

Now, it is getting the 50th Anniversary treatment, although technically this package should have been released last year. So All Things Must Pass is officially 51-years-old and has never sounded better. Dhani Harrison and Paul Hicks have not only dug out unreleased songs, takes, and rehearsals, but have also remixed the original album. In terms of the remix, they have done a fantastic job. They have kept everything that was great on the original while getting rid of the original clutter and condensed sound. All Things Must Pass sounds new and fresh and there is now space in the music. 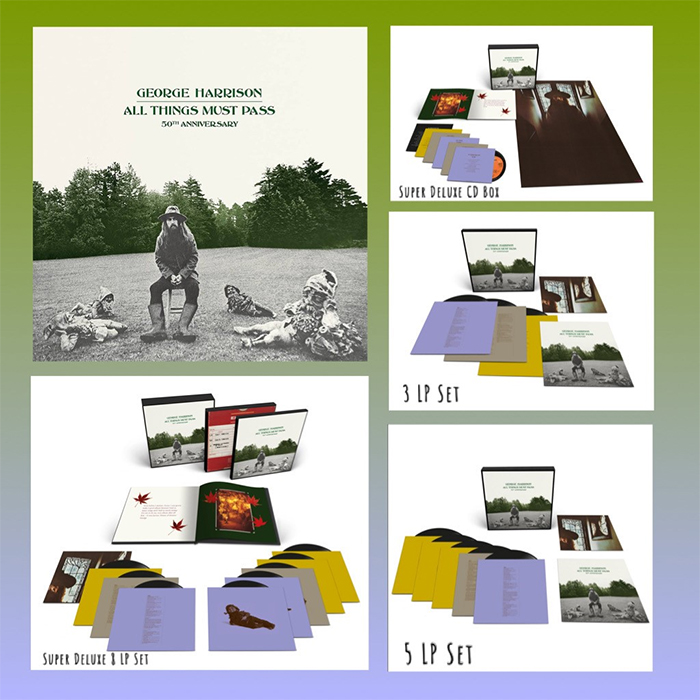 Harrison enlisted Phil Spector as co-producer, though he often criticized  Spector’s heavy-handed production. He had stated several times that he wanted to bring out the music more, and  Dhani and Hicks have done just that. Fans of the original will find this a whole new listening experience. Give “What Is Life” or “Beware Of Darkness” a spin. They sound fantastic. The same can be said for the other tracks, including the worldwide hit, “My Sweet Lord”. The acoustic guitars sound wonderful and one can hear Harrison’s incredible vocals.

Along with the remix of the album, there are 42 never before heard songs, that range from complete songs, such as “Cosmic Empire”, to rehearsals, demos and outtakes. All of these make for an absolutely fascinating listening experience. “Woman Don’t You Cry For Me (Take 5)” is of particular interest as Harrison would record this six years later for his 33 and ⅓ album. Here it is much rockier and dare I say better. It has an urgency missing from the re-recorded version, which I also love. The acoustic beauty “Mother Divine” should have found a home elsewhere. The bonus tracks are exceptional and a welcome addition. These do not detract from the original release but actually add to it.

The demos and outtakes are equally as fascinating. Give a listen to “The Art Of Dying (Take 1)”. Very different from the released version and features some stellar drumming from Ringo Starr. While others are not so different but shed a different light on the song, such as “Behind That Locked Door (Day One Demo)”. Also worth hearing is “Isn’t It A Pity (Take 27)”, which is sublime.

All Things Must Pass is an incredible album. Harrison was all of 28 when he finished it and stepped away from The Beatles. In doing so, he created a masterpiece, It has not only stood the test of time but redefined the concept of albums. With the bonus Jam section, Harrison let fans have a glimpse behind the curtain. For that reason and many more, such as influencing generations of musicians/artists, All Things Must Pass is certainly one of the most important  releases ever and very deserving of this expanded version.

Fans take note, there are numerous configurations of this release.