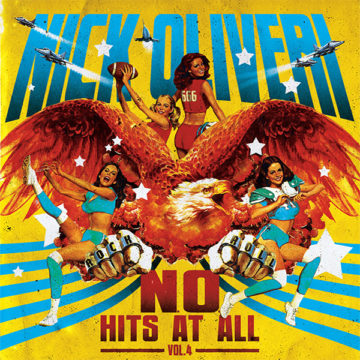 N.O. Hits At All Vol.4 stands as the fourth and final installment of Nick Oliveri’s No Hits At All series, a collection of records that chronicle the vocalist and bassist’s released – and in some cases, unreleased- work from the past quarter of a century. While mostly known for his work with Kyuss and Queens Of The Stone Age (1998-2004), Oliveri has been a featured vocalist and bassist on over fifty tracks with a wide range of bands – including Dwarves, the Mark Lanegan Band, and Mondo Generator, to name a few.  Much like its three predecessors, N.O. Hits At All Vol. 4 is a bombastic look at Oliveri’s work and proves to be just as exciting as an introductory sampler to his style as it would be for a long time fan and follower of the alternative punk icon.

N.O. Hits At All Vol. 4 opens with The Uncontrollable’s “Walk On”, a track that features Oliveri on not only vocals and bass, but drums and guitar as well in a strong solo performance and opens the record in an explosive manner with the songs strong 70’s punk rock aesthetic that ventures into hardcore territory with a halftime breakdown towards the end along with an alternative guitar solo driven by a thin but slinky tone.  The album continues with the unrelenting and heavy riff of “Identity, Isolate, Manipulate” by Biblical Proof Of UFO’s; a true standout track amongst the record.  Stepping slightly to the left of a straight forward punk or metal tune, Oliveri throws in Loading Data’s “Hanging Low” – perhaps the closest track to that from Queens Of The Stone Age’s early career.  Without a doubt, and much like the previous three compilations, N.O. Hits At All Vol. 4 has something from every corner of Oliveri’s expansive discography.

That being said, Oliveri’s take on vintage punk takes the centre stage on the record.  Whether it be his unplugged rendition of The Ramones’ “Endless Vacation” with Death Acoustic, or his vocals on Jennifer Finch’s “Susy Is A Headbanger” for a Ramones for kids compilation, to the abrasive nature of The Dwarves’ “Fuck You Up And Get High”, Oliveri proves himself to be a retro punk rocker, circa 1979, hopped up on Iggy and The Stooges, The Ramones, and The Germs in a more modern era where punk rock has gone sweet and sickly.  When listening to Rattlin’ Bones’ “Don’t Believe”, it’s hard not to imagine him ripping through the air above the crowd before smashing the last bass in his collection.

n many regards, the conclusion of Oliveri’s N.O. Hits At All collection solidifies the often unsung creative force behind an immense catalogue as something like a punk legend.  While it may often be overlooked, Oliveri did after all brought back 1960’s and 70’s proto-punk sensibilities into alternative rock through his work with Kyuss and Queens Of The Stone Age which would help shape the genre as it transitioned into the new millennium. N.O Hits At All Vol. 4 is an excellent addition to Oliveri’s series of compilations and, while the longest of them all- will still leave the listener digging for their early Queens Of The Stone Age records while scouring the internet for more of the singer’s abundant collaborations. Such a compilation only stands as a testament to the creativity and artistic integrity of one of modern rock’s underground and estranged influencers.

A passion for music has always been a part of Gerrod’s life. As a young boy, he was raised on a steady diet of the music from The Chili Peppers, Aerosmith, The Stones, Prince, and others from his mum. Raised in the GTA, Gerrod continued to foster his love for music by attending a wide range of concerts and learning the drums. His unapologetic passion for music has no bounds and has spread to a wide variety of styles, whether it be the 90’s rock that sound tracked his teenage years, the jazz he studied in university, or his newfound love for hip-hop. He recently received his bachelors in music and education from York University and is passionate about writing and reviewing good (and less than good) music. Gerrod is also the drummer and songwriter for a Toronto based rock & roll band, One In The Chamber.
RELATED ARTICLES
album reviews
9.0