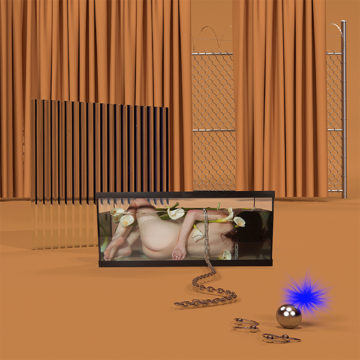 FRIGS’s debut album Basic Behaviour has all of the hallmarks of post-punk — straight-ahead and pounding percussion, guitar tones that squeal and roll, and a lead singer that wails as often as sings. These are not criticisms at all, as there is no genre that celebrates musical dysfunction so well, and all of that is on show here in Basic Behaviour.

Common sentiment for the Toronto-based band is that it is lead singer (and emotive wonder) Bria Salmena who knits the band’s dysfunction together, and it is true that she is a force to be reckoned with, building tension with each syllable. For my money, though, this album excels in its subtlety, and that is the rhythm section, especially the bass. If there is a backbone to the songs on this album, it is the bassline, and it is so solid and so tight that it allows for the rest of the band to flourish.

As someone who grew up in the 1990s and the golden years of grunge, it is hard to listen to this album and not be reminded of two particular bands: Sonic Youth, for the early development of the post-punk sound and vocal delivery, and Nirvana, for the wailed, raw vocals that so often characterize FRIGS’s songs on this album. Both of these are comparisons that say a great deal about the band’s potential evolution, not to mention their present ability. In truth, it is nigh-on impossible to listen to “Waste” and not hear early Nirvana in vocals, drum and guitar tone.

Basic Behaviour excels at its creation of disparate and dissonant sound held together by the band’s rhythm section and the effusive anger of Bria Salmena’s vocals. It may not break much in the way of new ground, but it is powerfully raw, it is darkly atmospheric, and it leaves you feeling like you’ve experienced something that may be hard to put into words. That certainly is the impact it has had on me.

Br. lives in southern Ontario, grew up on The Beatles and The Journeymen, spent his adolescence immersed in grunge, and his adulthood in British alternative. His greatest joy is seeing his son dance and grow into his own appreciation of the indescribable joy of music...
RELATED ARTICLES
album reviewsarts & craftsbasic behaviour
8.0