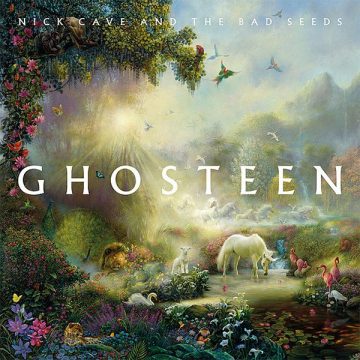 Alongside haunting synthesizer notes, Cave’s brooding croon announces the album with “Once there was a song yearned to be sung…” The opening track ends in a chorus of – if one can be permitted to say it – angelic voices, echoing, “Peace will come in time.”What follows is the sort of brilliance that can be expected only of Nick Cave and the Bad Seeds.

Cave once again opens the box containing his heartache since the tragic accident that claimed the life of his teenaged son Arthur in 2015. Ghosteen is something that has matured, a grief that has germinated since 2016’s sorrowful Skeleton Tree.

The metaphorical children of the first half of the album sing of enchanting imagery and beautiful journeys with religious undertones. Hope is offered in “Sun Forest,” in which “A spiral of children climbs up to the sun.”“Ghosteen Speaks” features the simple yet poignant line “I am beside you/Look for me.”

The second half offers a range of musical movements, from swelling orchestral sounds to light ornamentation and back again. Yet there is a world-weary quality to it. “I’m just waiting now for my time to come,” Cave sighs on “Hollywood.” The spoken word piece “Fireflies” features similar instrumentation to “Jesus Alone” from Skeleton Tree, hinting of the maturation of grief from then until now.

The musical arrange menton Ghosteen is equally as important as Cave’s melancholy, aching vocals. Much of the focus is on keys, reverberating synthesizer, and querulous strings, with very little percussion until the last track.

Ghosteen is music that impresses upon the soul. Cave is a storyteller who makes his fans as much a part of his stories as are the Bad Seeds, who weave a tapestry of music so intricate that calling this “listening” would be minimizing the experience.