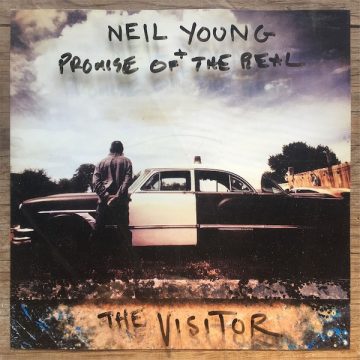 Neil Young & The Promise Of The Real
The Visitor
Reprise Records

Neil Young’s latest album The Visitor, created with Promise of the Real, acts as a preservation of Neil’s overarching political messages. There’s no subtlety here — this is an album from a Canadian who loves the USA, living and discussing the changes happening in America.

Spanning a variety of genres, from rock to blues, carnival and even a little pop, the album is surprisingly cohesive. While the lyrics are weak at times, classic Young gems and messages sprinkle themselves through out the album, making the discovery a wonderful treasure to come across.

“Almost Always” starts the album off gently with a guitar sound very similar to the one on Harley Davidson. Slide guitar enters into the tune making it a fairly peaceful sounding track. That mellow nature only lasts one track as Young throws himself into “Already Great”.

This second track is what many fans have been waiting for from Young; his unambiguous, specific opinion on what he thinks of Trump’s policy. While Young has made some rather coded comments, there is absolutely no dodging what he means in this song when the lyrics ring out, “No wall, no ban, no fascist U.S.A.”

With the ever-present moral compass and political rebel, Young’s “Visitor” is a welcome addition to his 39-album discography.  It also shows a slight transition in his work — Neil is looking at the big picture, his own life and his own political views.  He’s also challenging himself.

Exhibited not only in the Spanish-sounding “Carnival”, Neil shows a shift in his music creation on the track “Children of Destiny”. Big and beautiful, this song features boisterous brass and delicate strings before heading into the blusier more old-school Neil track “Diggin’ a Hole”.

Finally bringing the album to a close is the stunningly written “Forever” — a track that not only ties the whole album together but strengthens it all the while.  Featuring some of the most well-written lyrics on the album (“Earth is like a Church without a preacher. The people have to pray for themselves.”— how great is that?), “Forever” is a peaceful end to an album that started that way before unapologetically diving head first into the depths of politics and environment.  The simple guitar-strumming sound Young is so well known for and his clear vocals are featured for over ten solid minute before the album comes to a satisfying close.  This album is a must-listen in Young’s ever-evolving discography.

Gabrielle Mueller is a lover of all things music, writing and charcuterie boards. Gabrielle has a particular passion for music of the 1960s and the hippie movement in Toronto’s Yorkville district. Gabrielle runs her own music website, The Hippie Historian, where she reviews concerts, interviews musicians and writes about music history that spans the ages.
RELATED ARTICLES
album reviewsneil youngreprise records
9.0