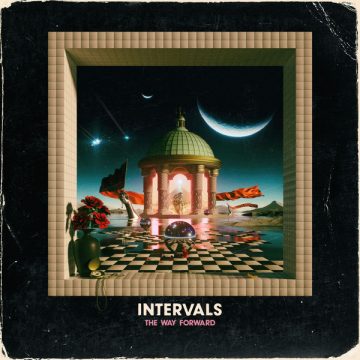 Local Toronto instrumental, progressive metal band Intervals recently came out with yet another beautiful album at the beginning of the month. After Aaron Marshall (Guitarist) recorded and released his solo album The Shape of Colour, he got help from familiar artists, Cameron McLellan (Protest the Hero) to play bass guitar, and Travis Orbin (Darkest Hour, Periphery, Sky Eats Airplane) on the Drums. This three-part band created an album that you can easily listen to all day, and with its upbeat tone will improve your mood, and motivate you to get things done.

The album starts off with what is likely their best-known song from the album Touch and Go, which begins with a subtle fill on the drums, following with Marshall’s righteous guitar riff which pulls you right into the album. Personally, I feel this is the strongest song on the album, as the song reveals the emotion behind the guitar. Their next hit song would be “Impulsively Responsible”. This song flows nicely, but is a slightly more laid back than the first track. My favourite track off the album might have to be “Leave No Stone”, for the simple fact that it sounds like they put a lot of work into matching the weird time signature, which gives the song a metal vibe, but still has the happy guitar going behind the heavy bass chugs.

In my opinion, as a whole album, it didn’t surpass their previous album The Shape of Colour, because every song was perfect. After listening to this album multiple times, it has become background music, which is why it is perfect music for doing activities to, as it’s not too distracting. Although not surpassing their previous album, The Way Forward will still be an album I will always jam out to.

Nicholas Power is a Canadian born photographer from Whitby, Ontario. He has been photographing live shows for three years, and is now getting into shooting for media outlets. He is currently a member of a band called Punchu, and is enrolled in Humber College's Creative Photography programme.
RELATED ARTICLES
album reviewsintervals
8.0