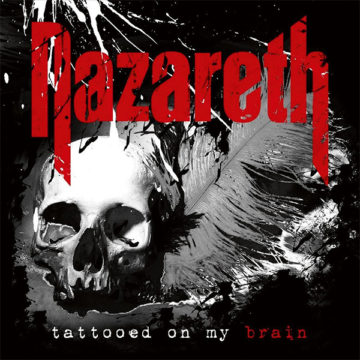 Nazareth has returned with their 24th studio album. Their last album was in 2014 (Rock ‘n’ Roll Telephone) and with the release of Tattooed On My Brain they have hit their 50th anniversary milestone. The album also introduces lead singer Carl Sentance, replacing original vocalist Dan McCafferty who retired from the band in 2014 due to health reasons. For those keeping track, the current lineup of Nazareth is original bassist Pete Agnew, his son Lee Agnew on drums (he has been in the band since 1999) and guitarist Jimmy Murrison (he has been with the band since 1995).

Tattooed On My Brain is a great album, but here they are not breaking any new ground. That is not to say that this album is a repeat of their old album, but it does mean that the album is exactly what one would expect. Straight ahead hard rock, with tight musicianship, excellent guitar solos and strong (and loud) vocals.

Sentance is a great singer and he has demonstrated that he is more than a capable writer and as noted, the musicianship is excellent. They form a tight unit, the band does sound reenergized, and the album rocks, hard. Sentance’s vocals come across as perfectly suited for the music, and one must admire the power in his voice. The title track “Tattooed On My Brain” harkens back to “Hair of the Dog”, both lyrically and musically but it is still its own song. It is one of the highlights of the album.

There are ballads, “You Call Me” which features some very nice guitar work from Murrison, and “Change”, which is more pop than ballad but it works on many levels. Both of these songs demonstrate that Nazareth has the ability to be versatile on their albums, as they have done in the past. Nazareth has always been more than just a hard rock band.

While the album rests on the ‘hard rock’ level, it is good hard rock. The songs are complete, well-arranged and well-written. The album would have benefited from a few more diverse moments but the end result is an album that holds together remarkably well, and has  two well- sequenced sides.

This is a relatively new lineup by fans need not worry. Sentance is not McCafferty but he is not trying to be. He is being himself and he is welcome with this incarnation of Nazareth. He holds his own and as a result Tattooed On The Brain comes across as an excellent Nazareth album, one that sits comfortably within their catalog.

Born and raised in Whitby, Aaron discovered music through his love of The Beatles. This led to a career in radio, writing for various publications, and ultimately a radio show about The Beatles (Beatles Universe), which ran for over four years. When not immersed in music, Aaron enjoys spending time with the loves of his life -- his wife Andrea, and daughters Emily and Linda (all of whom have an intense love of music too).
RELATED ARTICLES
album reviewalbum reviewshair of the dog
8.0