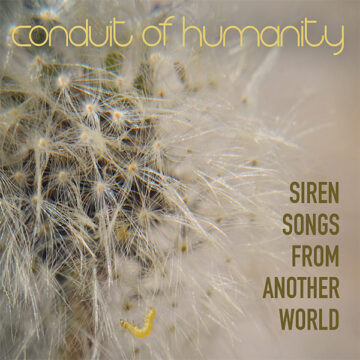 Conduit Of Humanity
Siren Songs From Another World
Rescord Records

Conduit Of Humanity is more of a collective than a band. Founded by Fred Jeske as a recording collaborative art project with help from many artists, they have released two previous albums. But make no mistake, Jeske is the mastermind behind this creative, and original project. Conduit Of Humanity creates their own distinct style without staying with one genre. Perhaps this is due to the addition of new players for each album and each song. However, the end result is very stylish and a very unique sound.

Siren Songs From Another World is the third album from Conduit Of Humanity, and as good as the other two are (and they are excellent albums, well worth going back to and listening to), this is their strongest album to date. It is jammed with extremely well produced, melodic pop songs that would not have been out of place in the 1970s, but these songs have a slight 1980s edge. That is not to say it is retro, because it isn’t but the overall feel of the album is somewhat nostalgic. Listen to “Another World” (written by Lexi Stern, who helped to mix the album with Jordon Zadorozny). It is a very up beat song featuring beautiful harmonies and great vocals. The same can be said about “Shine Out”, featuring  Candice Latimer, Thymme Jones and Jeff Libersher. Another outstanding song with a melody that gets into the ear and stays there.

There are other highlights, such as “Hoaxes”, which gets a very cool remix treatment from Stern (“Hoaxes II: CyberExotic Mix”) later in the album as a bonus track. Both versions of the song are essential and it clearly demonstrates how good remixes can be, when in the right hands. There is also an excellent remix of an older single, “Asa Brebner Is Dead (Angelic Remix)” (written by John Powhida and featuring Phil Thornalley) which is a welcome bonus track as well. This version has a little more power than the original single and has more of an edge.

Elsewhere on the album, there are very dreamy, chilled tracks, such as “Sirens Sing”, which does transport the listener to far off places. But what makes the song special is the slow build for a very energetic ending. It is a remarkable song. It clocks in at just over ten minutes but it never loses the listener’s attention. The same with “Fantastic Fires” (featuring Bob Wilcox and Fernando Perdomo)  which, although it is over eight minutes long, there is a lot going on to engage the listener. It reminds me of buying old Yes albums and listening to lengthy songs that are brilliant to listen to.

Siren Songs From Another World is a remarkable album, full of wonderful songs and sounds. It is a major accomplishment to bring a number of artists together to perform with one goal in mind, to create a fantastic album. Jeske and company have done just that, they have produced a brilliant album that holds together, is cohesive and consistently good. It is also, quite frankly, the soundtrack for the summer. One cannot help but imagine playing this album, with the windows open, during a nice long road trip in the summer. Conduit Of Humanity has brought us a joyous album, so, enjoy.