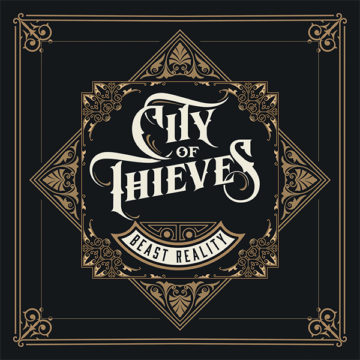 Beast Reality is the debut album from London’s hard rocking City Of Thieves. They have released two EPs (Incinerator and Acoustic) but Beast Reality is their first full length album. Some of the songs from the Incinerator EP found their way onto this album, and to be honest the EP was more of a sampler than a true stand-alone EP.

City of Thieves is a trio featuring Jamie Lailey (bass and lead vocals), Will Richards (drums) and Ben Austwick (guitars), and the band redefines power rock trio. They create a great deal of excellent sound for a three-piece. They are a tight unit and have a unified sound. They co-produced the album with Toby Jepson (Wayward Sons, Little Angels) and Beast Reality was mixed by Chris Coulter and Mike Fraser. Jepson lets the band do what they do best, play loud, hard, heavy rock. If anything, he assists the band with developing the songs into little epic adventures. The album is also mixed well and there is a healthy balance of all of the instruments and voice throughout the album.

City Of Thieves is more influenced by the classic hard rock bands than they are of the 1980s hair bands. They have picked up the gauntlet thrown down by bands such as Black Sabbath, Rainbow and early AC/DC. But let us be clear, they are not copying or borrowing the sounds or styles, they are simply influenced by these bands. What City Of Thieves is very good at doing, much like the previously mentioned bands, is writing melodies in their hard music. Hard rock does not equate with lack of tune, and this band is aware of what goes into good music. They have also recorded an album, not a collection of songs, but a cohesive album, with distinct track sequencing for side one and side two.

The album kicks off with the rocking “Reality Bites” and sets the tone for the album. The songs rock with some very strong lyrics, such as “Incinerator”, which has Lailey declaring “I learned not to choke/‘Cause I was born, born to breathe that air.” Strong words from a very fierce song.

If there is any issue with the album, it is that they would benefit from a little bit more variety throughout. The rocking and musicianship is near perfect and they know the genre well. They have learned a great deal from performing live and their previous band, Four Wheel Drive. Given that, the band would benefit from a bit more experimenting and spreading their wings within this genre.

The album is written, recorded and produced to be played live. When listening to this record, one feels the energy from the band, but also one can imagine how exciting these songs would sound live. Beast Reality is a great album, and an impressive debut album. Hard rock fans will enjoy this, and this is a band that will only grow.

Born and raised in Whitby, Aaron discovered music through his love of The Beatles. This led to a career in radio, writing for various publications, and ultimately a radio show about The Beatles (Beatles Universe), which ran for over four years. When not immersed in music, Aaron enjoys spending time with the loves of his life -- his wife Andrea, and daughters Emily and Linda (all of whom have an intense love of music too).
RELATED ARTICLES
album reviewalbum reviewsbeast reality
8.0