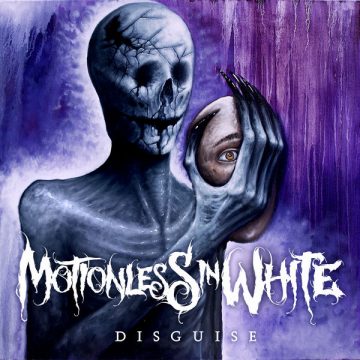 Industrial metal group Motionless in White present their most emotional lyrical album yet. The mental and emotional turmoil of vocalist Chris “Motionless” Cerulli are poured into 11 tracks on this new album.

With that in mind, you can guess what the title track “Disguise” is about: the struggles of trying to pretend to be something you’re not. “Sick of wearing a mask, sick of hiding my face”. The dark and aggressive song was one of two released prior to the album.

The other early-released song, “Brand New Numb”, on the other hand, is the most radio-friendly, mainstream sounding song on the entire album. Two interesting, yet very different song choices as a preview to the album.

If you like Nu Metal, you’ll hear those influences throughout. Hints of Slipknot seem to make their way through the track “Thoughts and Prayers”, while other tracks such as “Broadcasting From Beyond the Grave: Death Inc.” have a real Rob Zombie feel to them along with a singalong chorus of “We are the weirdos, in your stereo, disco freak show”

The album has a similar sound to their previous album Graveyard Shift, but each song is unique in its own way. The album is full of catchy choruses and heartfelt lyrics.

Trista’s a music addict who’s taste in music spans over numerous genres. She enjoys playing her bass guitar, but honestly she’s not very good at it. So she goes to concerts and watches real musicians who are far more talented than her. You’ll find her there in the front row, because, well, she’s short and wouldn’t be able to see the stage very well otherwise, and because she strives to get the perfect photo to capture the experience.
RELATED ARTICLES
album reviewalbum reviewsroadrunner records
8.0