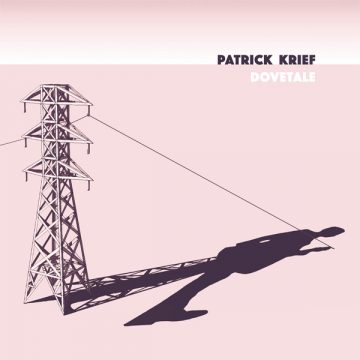 Montreal’s Patrick Krief, known simply as Krief, continues to build upon his impressive solo career. After over ten years of performing, writing, and composing music as lead guitarist and backup singer as an important former part of indie rock darlings, the Montreal-based The Dears, with the release of Dovetale.

Krief’s influence in The Dears and vice-versa can be clearly heard in his solo material, which strikes many similarities, including his deep brooding vocal style to The Dears’ frontman, Murray A. Lightburn.

Although the above may be true, Krief blazes through Dovetale with his sonic, guitar-driven rock on his own distinguishable terms. He is virtually a one-man effort, accompanied by a select few guest musicians. Dovetale’s overall theme of love lost and love found in both lover and friend is clear, with the word “love” appearing in nearly every song, although a darkness exists in Dovetale that brings love into focus in a real-life fashion.

Along with Krief’s own sound, hints of Electric Light Orchestra (ELO), Led Zeppelin, Leonard Cohen, Fleet Foxes, and Band Of Horses can all be heard throughout this fine album. There is no weak link, with every song having the potential to be a true favourite to the listener.

Lead single, “Daydream Lover”, is a definite standout. The retrospective nature of failed love begins the album on a lonesome note, which is pulled off rather nicely by Krief. The atmospheric guitar and steady drums resonate in combination with the sombre lyrics.

Regret is the permeating theme in “Idols”, which features Roberto Arquilla of The Dears on bass. The lyrics like “Next time I swear I won’t stand in the way of your love, I really hope that he’s nothing like me.” are in contrast with the upbeat instrumental tempo.

“Take The Night”, the Cohen-inspired eighth song, is a lore of the desolation of friendship betrayal. Krief takes a firm stance, fighting back at this “friend” with a seething and firm stance of self-empowerment.  “Don’t take the night/Take the gun and I’ll take the knife.”.

Krief’s self-produced, multi-layered affair, Dovetale is a definite album to listen to in its entirety. Krief should be a household name in the Canadian rock music scene, and hopefully he gets his rightful due, in part to this release, his strongest effort to date.

John Graham is a Vancouver-area resident who typically spends most days admiring music of all genres. When not listening to music, John is usually at a live show, somewhere in the bowels of Vancouver.
RELATED ARTICLES
album reviewalbum reviewsindica
8.0