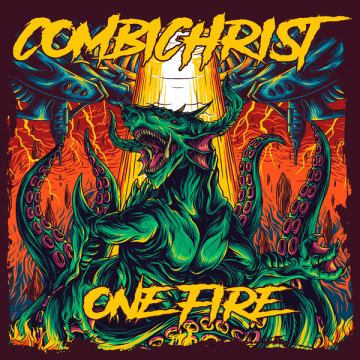 Combichrist
One Fire
Out of Line Music

American industrial/aggrotech metal band Combichrist are back at it again with their ninth studio album, One Fire. Like their previous albums, One Fire features an arsenal of bass-heavy aggressive tracks best suited to stomp out a dance floor with.

This album features a number of standout tracks that are intensely powerful to listen and dance to and yet also offer a bit of humour along with it. “Lobotomy” proves to be a pretty incessant earworm but in the best way. This song that is destined for the clubs has grandiose vocalist Andy LaPlegua pledging his need to drink the night away. “I’m sure it’ll hurt tomorrow, just don’t want to hurt tonight.”

“Bottle of Pain” is an unexpected addition to this album. This song is a highly dramatic, even overblown, pirate sea shanty that features an orchestral backing – a departure from the aggrotech force through the rest of the album. This song about fighting through the dark side at the end of a bender would fit in very well to a seafaring, loot and blunder soundtrack.

“California Uber Alles” is a song that immediately stands out for its political forcefulness. Taking a cue from the controversial line in the German national anthem “Deutschland uber allen” meaning Germany over all, LaPlegua likens this to living in California under the rule of governor Jerry Brown even going so far as to compare him to Hitler. “Soon I will be president/Carter power will soon go away/I will be Führer one day”

One Fire is a solid album from Combichrist, a great addition to their discography and something that will surely be a hit with DJs. I look forward to stomping out a dance floor to this album soon.

Samantha is both a writer and a fan of the arts and has been able to find numerous ways to pair the two. Eager to dive head first into writing for Spill, Samantha is an avid partaker and reviewer of live art in Toronto serving as an editor at Mooney on Theatre exploring live local theatre, she's a photojournalist for Go Globehopper, a travel, dining and tourism blog that focuses on Toronto and abroad and previously for Lithium Magazine. She's passionate about music, theatre, photography, and writing -- not necessarily in that order. She drinks tea more than coffee, prefers ciders over beers, and sings karaoke way too loudly. You can follow her on various social media including Facebook, Twitter, and Instagram.
RELATED ARTICLES
album reviewalbum reviewsandy laplegua
8.0