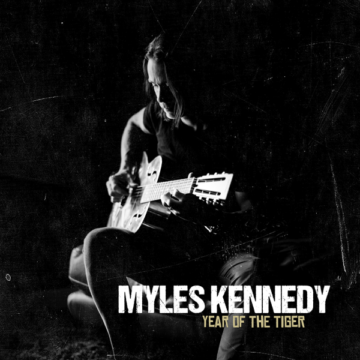 Having fronted and played guitar for Alter Bridge as well as being Slash’s go-to choice for two solo records and a pair of stellar tracks on his 2010 self-titled solo record, Myles Kennedy has solidified himself not only as one of modern rocks most powerful vocalist, but also among the genres most visionary songwriters. It comes as no surprise then that Kennedy has released his first solo record, the greatly anticipated Year Of The Tiger and much like some of his greatest contemporaries – Chris Cornell, Eddie Vedder – he has chosen to take a primarily acoustic route for this record; an artistic direction he rarely gets to pursue in his main projects.

Opening with the title track, it is beyond clear that Kennedy is a master of creating an emotional atmosphere with little more than his rich vocals and the six steel strings of his acoustic guitar. The song contains a dark sense of urgency, tension, and yet a strong sense of light. Considering much – if not all – of the record is based around the loss of his father – who passed away after refusing medical assistance due to his faith in the Christian Science church when Kennedy was four years old. Kennedy channels his love for his family and melancholic memories throughout the album in a manner that is intimate; making for a vulnerable collection of music. He grapples with the loss on songs like “Blind Faith” and “Haunted By Design” while empathises with his mother who raised him and his brother without her husband on “Mother” and “Turning Stones”.

Musically, Year Of The Tiger proves to be just as complex and yet conflictingly sparse. Juxtaposing or not, Kennedy proves once again to be among rocks most esteemed and brilliant songwriters. While every track feels fresh, exciting and resembles a sonic adventure following Kennedy’s narrative, certain songs stand out among this impressive collection. From the upbeat blues of  “Devil On The Wall”,  the emotional capacity of “Love Can Only Heal”, and the folk nature of “Ghost Of Shangri La”, Year Of The Tiger is brimming with exceptional tracks, each different from the last.  “The Great Unknown” however is not only the most daring, but the most explosive and unlike anything else on the record. Plugged in, this would be the easiest to imagine blaring at an Alter Bridge concert, yet it fits seamlessly on Year Of The Tiger while also elevating it with a level of raw intensity that I haven’t heard in recent memory.  While already the whole record has the potential to sweep an array of album of the year awards, ”The Great Unknown” is more than likely to stand as one of the best songs released this year.

The story goes that Kennedy wrote and recorded his first solo record, and then threw it away before making Year Of The Tiger. This leaves me content and curious.  Make no mistake, I am beyond happy that this is the record that Kennedy chose to release; Year Of The Tiger a flawless record. It is so good, that it leaves me wanting more; even an album of outtakes like the now defunct first record is bound to be an exciting album.  Over the course of its twelve tracks, there is not a song on Year Of The Tiger that fails to draw the listener in to what feels like an intimate invitation into Kennedy’s living room studio. From the song writing to his stellar and versatile guitar playing and vocal performance, Kennedy has carefully crafted an immediate and instant modern masterpiece with Year Of The Tiger; an unparalleled solo debut from one of rock & roll’s finest.

A passion for music has always been a part of Gerrod’s life. As a young boy, he was raised on a steady diet of the music from The Chili Peppers, Aerosmith, The Stones, Prince, and others from his mum. Raised in the GTA, Gerrod continued to foster his love for music by attending a wide range of concerts and learning the drums. His unapologetic passion for music has no bounds and has spread to a wide variety of styles, whether it be the 90’s rock that sound tracked his teenage years, the jazz he studied in university, or his newfound love for hip-hop. He recently received his bachelors in music and education from York University and is passionate about writing and reviewing good (and less than good) music. Gerrod is also the drummer and songwriter for a Toronto based rock & roll band, One In The Chamber.
RELATED ARTICLES
album reviewsalter bridgemyles kennedy
8.0