SPILL ALBUM REVIEW: ME & MUNICH – POSTPONING THE PAST 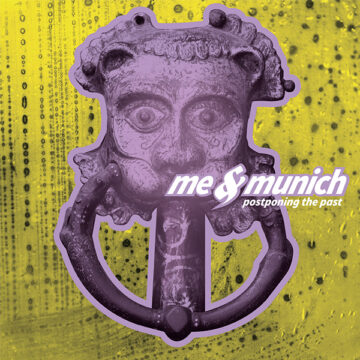 Me & Munich
Postponing The Past
Cloudy Water Records

Postponing The Past is Me & Munich’s second album. This post punk band from Denmark has put together a very rocking and solid album full of hard driving songs. The band burst on the hard rock/post punk scene in 2020 with their debut album Gaslighting. Given the events of the last two years, it is no surprise that Postponing The Past was a couple of years in the making and does have some well-constructed energetic songs. From the guitar-driven opening track “Godspeed”, the listener will know that they are in a 1990’s-influenced hard rock arena.

The band is tight and creates an emotion-filled rocking sound. Guitars and heavy drums are the order of the day, but the vocals are not screamo, but rather sedate. In some ways the vocals do tip their hat to Kurt Cobain, but then the band itself owes a great deal to Nirvana and the entire grunge movement. They have created their own sound, but they are indebted to Seattle and the musical punk groups of that city.

By track six, one is ready for a breather, which comes in the form of the very beautiful “Shadows Unfolding” which is a very different sound for the band, but it is so welcome. It starts off very lovely, but in true form it builds to a pretty heavy and loud ending. The same can be said for the last track on the album, “A Curse In Your Ocean”, which again has a slow opening and builds to a very different sound by the end. It is a brilliant way to end the album.

That is the main problem with the album. Although it is full of brilliant songs, there is a sameness to the whole album. As a result, a little more diversity throughout the album would be welcomed. They have the talent and ability to shift gears, and they demonstrate this in very small and infrequent moments. Having said that, fans will love Postponing The Past and Me & Munich just may add new followers to their growing fanbase.

SPILL ALBUM REVIEW: ME & MUNICH – POSTPONING THE PAST