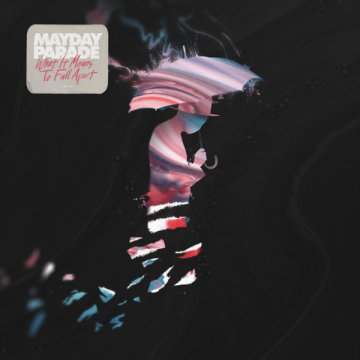 MAYDAY PARADE
WHAT IT MEANS TO FALL APART
RISE RECORDS

Since 2005, Mayday Parade has been a strong presence in the pop-punk and alternative scene. An unwavering sound for the past 16 years that seems to mature and get more solid with time, Mayday Parade has experienced growth within themselves and with their fans. When it came down to making their new record, What It Means To Fall Apart, the band diverged from the usual path that they usually took at the studio.

Sometimes you don’t need a final destination to make the music you want to make, this seemed to be the case for the Florida native band. With their goals purely set on writing the best songs they could, whether it was just a song, an EP, or an album, whatever they chipped away at, they would leave the studio with something they would be proud of.

What they left the studio with is their seventh album, What It Means To Fall Apart, and it’s by far one of their most intriguing records to date. A slow burner of a record at first, it’s not meant to hit you all at once. There are so many emotions to digest on this record upon the first listen. Divided into two listening experiences, one can experience the soundscapes and the tone that Mayday Parade wants us to sense and feel.

Starting with the first moment, “Kids of Summer,” the band shows a confident and infectious side to their instrumentality while also showing their trademark vulnerability within their lyricism. It’s the perfect opener to a gateway of other huge junctures that will soon follow on the record.

Another heartstring-pulling moment that stands out on this album is “Think Of You.” An acoustic sunbathed record accented with an afterglow of nostalgia and gorgeous atmospheric whistling highlights, it’s a beautiful track many will come back to on the album.

Other stand-out moments are “If My Ghosts Don’t Play, I Don’t Play.” A very different space we are used to seeing from this band, Mayday takes What It Means To Fall Apart pop-punk aura, taking it into alternative genre territory. Surprisingly, it doesn’t take away from the overall energy of the record and propels us forward.

Other sentimental numbers that hold delicate, sentimental value are “One For The Rocks And One For The Scary” and “Notice.” Bringing back the vibes of what we are used to hearing on past May Day efforts, Derek Sanders’s passionate vocal approach breaths life to these touching tracks.

Other tracks such as “Heaven” speak volumes to the band’s creativity and willingness to go out of the box to get their message across lyrically and atmospherically. A synthy, glitch soundscape that takes us away from what we are used to hearing on this album, the band is subtly trying new things within their career, enjoying that process, and is sounding great doing that.

Mayday Parade takes us on another powerful and heart-warming journey through What It Means To Fall Apart. Sometimes when you don’t have a set destination, the best of creations seem to shine through because of it. In this case, some of their best work came through on this record. While for a band it’s about creating music for themselves, it’s just as much about creating for yourself as it is connecting with fans. What It Means To Fall Apart does this, all while skillfully trying new things in the process. Mayday Parade has bought that wispy spark and shine back into the pop-punk scene this year with this record, and honestly, the year would not have been complete without it.