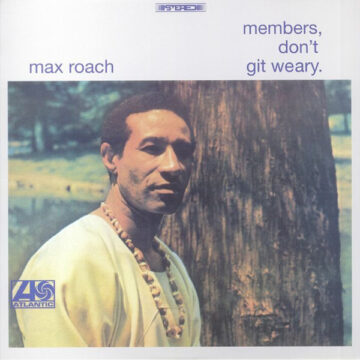 Despite passing in 2007, Max Roach remains a quintessential figure among modern jazz as not only an influential drummer, but as one of the musicians who led the shift in the genre in the ‘50s and ‘60s alongside the likes of Miles Davis, John Coltrane, and Wayne Shorter. It is because of this that Real Gone Music has chosen to reissue a pair of Roach’s solo records, as a bandleader. The first of which, Members, Don’t Git Weary, originally released in 1968, is among his most revered.

Opening with the push and pull rhythms of “Abstructions”, Roach and his band – consisting of Gary Bartz on the sax, Charles Tolliver on trumpet, bassist Jymie Merritt, and pianist Stanley Cowell – saunter through a rhythmic track, led primarily by the piano solo, and accented with shots from the horns. It isn’t until the following song, “Libra”, where Members, Don’t Git Weary truly picks up. The post-bop track is a stellar performance from the entire band. Following Roach’s sublime lead, “Libra” modulates rhythmically seamlessly with the band moving through the song without a bump. In every way, “Libra” is a prime example of not only Roach’s abilities behind the kit – the song does feature a quick solo after all – but more so his presence as a band leader, something not often associated or as audibly noticeable for a drummer.

Much like “Libra”, Members, Don’t Git Weary continues forward in a manner that is nothing short of incredible. From the moody melodicism of “Effi” to the hint of avantgarde spoken word on the title track, Members Don’t Git Weary is a masterclass of jazz performance. The closing song, “Absolutions”, in particular is an odyssey of rhythm, dark and moody tones, and carefully curated and improvised solos. Without a doubt, “Absolutions” is a jaw dropping track that – even without the previous songs, all of which strong – cements Roach and Members, Don’t Git Weary in the echelon of truly excellent jazz albums.

If you’re only familiar with Roach through his iconic performances behind the kit for some of the genre’s best, Members, Don’t Git Weary serves as a strong entry point into his massive back catalogue of solo material. Furthermore, Members, Don’t Git Weary elevates Roach’s status beyond being just a drummer, but as a powerful band leader capable of writing moving, but challenging, pieces and guiding a band through them with ease. In some regards, Members, Don’t Git Weary only proves that his legacy as a bandleader should rival his status as one of the greatest jazz drummers.

A passion for music has always been a part of Gerrod’s life. As a young boy, he was raised on a steady diet of the music from The Chili Peppers, Aerosmith, The Stones, Prince, and others from his mum. Raised in the GTA, Gerrod continued to foster his love for music by attending a wide range of concerts and learning the drums. His unapologetic passion for music has no bounds and has spread to a wide variety of styles, whether it be the 90’s rock that sound tracked his teenage years, the jazz he studied in university, or his newfound love for hip-hop. He recently received his bachelors in music and education from York University and is passionate about writing and reviewing good (and less than good) music. Gerrod is also the drummer and songwriter for a Toronto based rock & roll band, One In The Chamber.
RELATED ARTICLES
album reviewalbum reviewsreal gone music
10