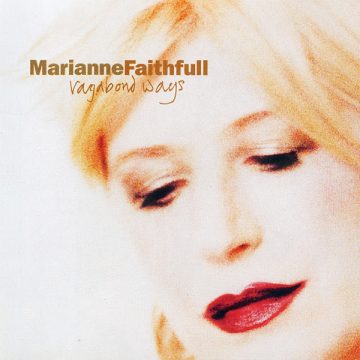 Vagabond Ways was originally released in 1999 by Marianne Faithfull. For this album, she tapped Daniel Lanois and Mark Howard to produce her return to rock, or rather alternative rock. It was a very smart move, as his production style at the time fit her and her songs.  Vagabond Ways features songs Faithful co-wrote but also covers of others written by Leonard Cohen, Elton John, Bob Dylan, Roger Waters and Lanois.

When released in 1999, Vagabond Ways was not the success that it deserved to be , but it holds up 23 years after it was initially released. Faithfull’s voice is in fine form. The sparse backing adds the right atmosphere to the rather unhappy tales Faithful relates on the album. As usual, Faithfull is not afraid to go into the darker corner of her mind, her past, and to the world.

Her covers are carefully chosen to fit the mood, but this is really Faithfull’s album. Her lyrics of her originals are nothing short of startling and sometimes a little disturbing. She explores lost love, pain, poor treatment and social struggles. She does not back away from topics that may not be the most listener friendly. But she was never about having the big hits, but rather creating art and creating something that lasts. This album succeeds in both areas.

In terms of covers, Roger Waters provided a song to her that Pink Floyd never recorded, performing bass o the track. “Incarceration Of A Flower Child” would not be out of place on The Wall, and Faithfull handles it beautifully. Elton John and Bernie Taupin’s “For Wanting You”, which is more gothic theatre than rock, and her Dylan cover, “Blood In My Eyes” are absolutely exquisite. The songs Lanois wrote for Faithfull are also perfect for her. She has the support of some very famous and talented artists such as Emmylou Harris and longtime collaborator Barry Reynolds.

This being a reissue, there are, of course, bonus tracks. Most are demos or early versions, the best being the demo for “Incarceration Of A Flower Child”, while others are mildly interesting. To be honest the additional songs are not really essential and add little to the album. Fans and collectors will welcome the bonus tracks, others just may stop when the album proper is finished.

Vagabond Ways is an important album for Faithfull and it is great to see it back in the shops. It was not fully appreciated or promoted when it was first released, so now listeners have a chance to hear this brave, and at times disturbing album.