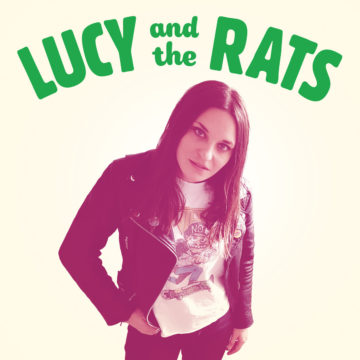 Lucy And The Rats opens with “Pills”, a sickly sweet bubble-gum rock ode to prescription drugs. The track is a solid opener for the record but feels like it could have been bigger. One also may have expected the self-titled debut record from a band called The Rats to be both more grimy and aggressive. Instead, Lucy belts out soft vocal melodies overtop clean instrumental parts. There is a little bit of Veruca Salt in here along with a touch of Hole; however, Lucy And The Rats seems far more influenced from both the pop punk of the 2000s as it is from early roots rock from the ‘50s. It is not hard at all to imagine Lucy and The Rats as being among Phil Spector’s biggest girl groups

While Lucy And The Rats displays a simple but strong song writing voice across the album – “So Simple”, “Night”, and “Girl” all standout for their simplicity and there weaving and shapely vocal melodies – the album as a whole feels like it is constantly coasting on the same wave it started on. Throughout the record, little shifts in terms of the vibes, grooves, styles, or tones heard. It is because of this that the album begins to feel monotonous after the first few tracks and ultimately hinders a great band from reaching their potential.

Lucy And The Rats is a strong first attempt for the London-punk outfit. It is not without its flaws, but that does not mean that this is any less of a band to watch out for. Lucy And The Rats, while repetitive, is highly nostalgic for the proto punk age of the early ‘60s, making for a fun album.

A passion for music has always been a part of Gerrod’s life. As a young boy, he was raised on a steady diet of the music from The Chili Peppers, Aerosmith, The Stones, Prince, and others from his mum. Raised in the GTA, Gerrod continued to foster his love for music by attending a wide range of concerts and learning the drums. His unapologetic passion for music has no bounds and has spread to a wide variety of styles, whether it be the 90’s rock that sound tracked his teenage years, the jazz he studied in university, or his newfound love for hip-hop. He recently received his bachelors in music and education from York University and is passionate about writing and reviewing good (and less than good) music. Gerrod is also the drummer and songwriter for a Toronto based rock & roll band, One In The Chamber.
RELATED ARTICLES
albumalbum reviewalbum reviews
7.0

by Josh Whitworth on May 25, 2018
A$AP Rocky  TESTING A$AP Worldwide/Polo Grounds/RCA Records The third studio album by A$AP Rocky has officially been released under his own label A$AP Worldwide. The album is aptly named TESTING [...]
7.0