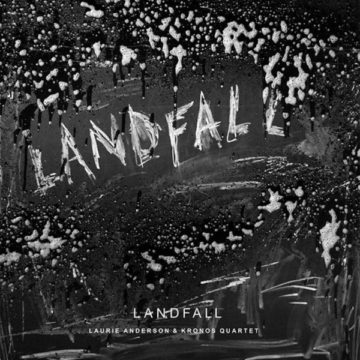 This is a pairing that is long overdue, as is the album. The origins of Landfall are as interesting as the album itself. For many years Kronos Quartet were looking to work with Anderson, and after her 2010 album, Homeland, which featured a song titled “Flow”. This came to the attention of Kronos Quartet and from there they began to work on this album. Landfall was recorded in 2014 and it has taken a few years to mix it.

This album is hard to describe and even more difficult to review. It is an art piece. An album about a hurricane, which was started prior to Hurricane Sandy hitting New York. But it is not about a hurricane, it is about loss.  The origins of the work is performance, and as such, Anderson uses visuals during the show.  The show was performed well before it was actually recorded. There are songs on Landfall that have lyrics, but they were projected behind Anderson and Kronos Quartet. You get the words in the packaging, but the vocals are not recorded.

It is safe to say that this album is best listened to as a CD or on vinyl so one can get the entire impact of the work. Also, this album is best enjoyed in one sitting, much like a performance. It is a concept album about a storm, that evolved into a story about Hurricane Sandy.

And it is important. Anderson says a lot with few words and she is able to convey a great deal with the use of music and the use of words. Some of the tracks are pure instrumentals but when one reads the titles in conjunction with the track prior, the songs all start to connect and make a great deal of sense.

For those interested, the male character she created, who Lou Reed named Fenway Bergamot makes an appearance on the brilliant “Nothing Left But Their Names”. An interesting song outlining and naming extinct animals. This is a character that Anderson uses on many of her recordings and in concert. She alters her voice and in doing so creates an unsettling voice.

Anderson uses her violin in a more traditional sense on this album, although there are still moments when she dips into her more experimental side. The same can be said for Kronos Quartet, who have never been a traditional string quartet. Together they have managed to produce sounds throughout this album that evoke the feelings of the text. Loss, fear, reminiscing, sadness are all present throughout the album. Listen to “Everything Is Floating”, the last song with vocals. “And I looked at them floating there in the shiny dark water, dissolving. All the things I had carefully saved all my life becoming nothing but junk.” Simply heartbreaking.

Anderson has been addressing loss for the last few releases, beginning with Homeland. The loss of her husband, Lou Reed, has been a focal point for her, and indeed when she started writing this album, Reed was there to provide her with feedback. The album is dedicated to him.

Landfall is an unusual album. Not classical, but classical. It is an album in which one can be immersed. The sound, the music, the lyrics and the text all come together to form a work of art. The playing and the music is unlike anything issued this year. As good as it is this is not for everyone. It can be beautiful and disturbing at times, but never boring. This is a combination that is made to work and it does. It is not a light or fun album and one that is demanding of your attention. For some, they will be rewarded, others may wonder what the fuss is all about. Fans of both Kronos Quartet and Anderson will know what to expect and will not be disappointed.

Anderson has also written a book to accompany the album, All The Things I Lost In The Flood: Essays On Pictures, Language and Code.

Born and raised in Whitby, Aaron discovered music through his love of The Beatles. This led to a career in radio, writing for various publications, and ultimately a radio show about The Beatles (Beatles Universe), which ran for over four years. When not immersed in music, Aaron enjoys spending time with the loves of his life -- his wife Andrea, and daughters Emily and Linda (all of whom have an intense love of music too).
RELATED ARTICLES
album reviewsnonesuch records
9.0