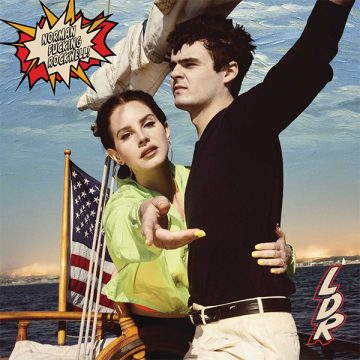 On Lana Del Rey’s fifth major label studio album, Norman Fucking Rockwell!, she shows herself to be developing into one of America’s finest singer/songwriters, with both biting as well as humourous tongue-in-cheek commentaries, about the state of political and cultural chaos in the U.S.

Produced by Del Rey and Jack Antonoff, with help from Zach Dawes, Andrew Waitt, and Rick Nowels, the album consists primarily of 14 soft-rock and psych-pop piano tracks, that examine the surface and the underbelly of the so-called American Dream.

The soaring violin and piano opening on the title track, give only a slight hint of where this album is heading, but the picture becomes clearer that we’re moving into highly refreshing,and uncharted lyrical territory with the second track, “Mariners Apartment Complex” —

“You lose your way, just take my hand/
You’re lost at sea, I’ll command your boat to land/
You took my sadness out of context, at the Mariners Apartment Complex.”

Two ballads then follow, the self-contemplative “Venice Bitch” and the self-examination of “Fuck It I Love You.”

Del Rey’s love of all things California is evident throughout the record, even on  “Doin’ Time,” where it starts off with the breezy old refrain “Summertime, and the Livin’ Is Easy,” but then del Rey laments, “Go to the party, dance to the rhythm, it gets harder.”

The contemplative spoken word piano and violin ballad “Love Song” is followed by the confessional tone of “Cinnamon Girl,” and by poignant musical observations on love and life in “How To Disappear,” “California”, and the wistful realization of “The Next Best American Record.” But the final song, “Hope Is A Dangerous Thing For A Woman Like Me – But I Have It,” is not only one of the superlative tracks on the album, but should win some kind of prize for the title alone.

One of her best albums to date.

Gerry Young is President of Current Records and Management, and author of the 2011 biography Pop Goes The Weasel: Rock And Roll Off The Record, available at Indigo/Chapters, Barnes & Noble, and Amazon.com. He has recorded and managed Juno Award winning bands Martha And The Muffins and The Parachute Club among others.
RELATED ARTICLES
album reviewalbum reviewsinterscope
8.0