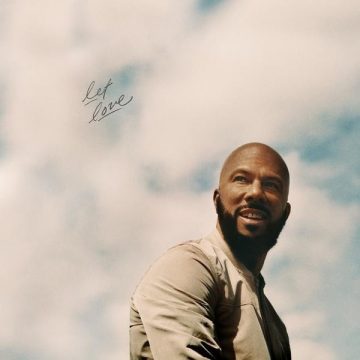 Actor, author, motivational speaker, and rapper Common showcases his positive attitude by examining all kinds of love on Let Love. Formerly known as Common Sense, this is the Chicago rapper’s first album in his own right since 2016’s Black America Again.

It is a generally mellow sounding album, thanks to the likes of such guests as Samora Pinderhughes, Jill Scott, and Daniel Caesar. The release coincides with that of Common’s latest book, Let Love Have The Last Word, which has obviously left its mark on this album, and not just in the title.

There’s a strong Christian overlay on many tracks, most overtly of course on the closing “God Is Love”, and on the tribute to his mother (and mothers in general), “Forever Your Love”. His raps are sharp and to the point, even if he does take a little while to get his flow going, but he’s well into it by “Hercules” and the tale of infidelity, “Fifth Story”, though Eminem did come to mind here.

Common is not above dropping a few big names himself, but to be honest these are generally people he has worked with as peers, and on “Memories Of Home” he supplies some of his autobiography, whilst BJ The Chicago Kid supplies some sweet hip hop soul vocals. “My Fancy Free Future Love” is perhaps the most energetic performance here, which for this jazzy number means the track is not that far away from classic Stevie Wonder in the vocals and arrangement, with Common sounding pretty urgent as he delivers his paean of praise.

Common’s raps are generally controlled and relatively relaxed,which suits him and his messages, seemingly a man at ease with himself and with others, but who still has a lot to say.

Norman Darwen grew up in north-west England admiring Elvis’ gold lamé jacket, Lord Kitchener’s way with words, and his much older brother’s and sister’s dancing to The Rolling Stones’ ‘Little Red Rooster’ on the telly. He’d wind aforementioned brother up by reading the entire contents of an R’n’B magazine he used to have to collect from his local shop for him and then reciting back as much as he could remember. Some years later he’d wind up his own friends by telling them who these people were that Led Zeppelin etc were covering – Willie Dixon, Howling Wolf, Otis Rush etc. These days he still listens to the blues, but has added a taste for reggae, zouk, rap, folk and anything else that takes his fancy…
RELATED ARTICLES
album reviewalbum reviewshercules
8.0