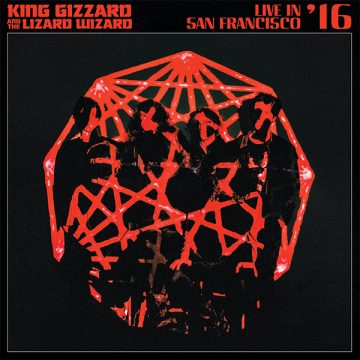 It has become standard in modern music to say that a certain artist or band is “on a roll”. Usually that means that they have issued a series of releases or have had a series of good live shows–something it seems we are forgetting these days

When applied Australia’s King Gizzard & The Lizard Wizard, that term has a specific connotation–they are always on a roll. Each year they seem to have a series of album releases, and until the pandemic, a pile of brilliant live shows.

No real live shows in 2020, but they still managed to come up with at least two excellent live album releases. One was Live in London ’19 and the other is the one in question here, Live In San Francisco ’16. Were there more? Quite possibly.

So, what is the difference between The Gizzard’s live recordings and those in the studio? As far as the energy, emotion, and the quality of their musicianship, practically none. You get the expected dose of psych/stoner/modal structures with at least a dozen other things in between, often played at a breakneck pace.

The quality of the release depends on the recording itself, and how varied the set was. And that is where the Live In San Francisco ’16 tops the bill. The sound quality is excellent, and the band shows why it is currently one of the best live acts around. This album reminds us what live music should sound like.

Formerly a lot of things, including a journalist and a translator, currently a freelance writer living in The Netherlands.
RELATED ARTICLES
album reviewalbum reviewsato records
8.0