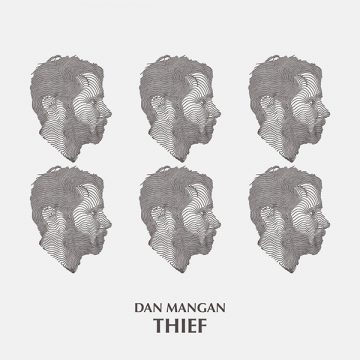 “I get sick of the same taste in my mouth and sometimes I need to sing someone else’s song to cleanse my palate.”

A good cover song ought to sound as if the artist has connected to the beauty that exists in their chosen tune, spending time getting to know it, and then introducing it to some new peaks and valleys as it is made into their own interpretation. Thief, a collection of covers recorded over the last decade and the latest release from Canada’s beloved Dan Mangan, holds true to what a worthy cover can be.

These aren’t just cherry-picked tunes, they are songs that have held deeper meaning and weight for Mangan. This is especially true on the opening, “Losing My Religion”, where he has completely shifted the original punch of REM’s classic, and the result is softer, more dreamy, and even seems to hold a new relevancy in our current world situation. Originally stemming from an old southern saying that refers to being at the end of one’s rope, and when calm turns to anger, and although the original may have veered more into the sway of the frustrated romantic, Mangan’s take feels a bit more world weary, something of which many of us are currently feeling.

“In the Aeroplane Over the Sea” from the amazing Neutral Milk Hotel album of the same name, is fairly true to the original but still has that warm fuzzy Dan feel and even the mysteries of Jeff Mangum’s obscure dream-like imagery seemed a little more accessible. Notable was Mangan’s substitution of whistling in place of the eerie old singing saw bit in the original, which made me feel warm in my tum-tum.

“Have a Little Faith in Me” is another standout take on an old favourite where he has turned down the lighting, softened the camera focus and reimagined wonderfully John Hiatt’s gorgeous classic.

Thief may not be a platter of fresh new material, but this scenic route through familiar territory feels like a well-intended and timely gift as these  strange days give way to winter. Dan Mangan has given fans a glimpse into some of the music that has moved and possibly helped shape his craft and he’s done so in a way that pays deep respect.

It took the recommendation of a best friend to get me into the pages of music magazine writing. Armed with the deepest appreciation for all the music, a ridiculous sense of humour, and the apparent ability to string a few words together, these fingers started giving. Who knew it would become one of my favourite things many years later and that I'd enjoy seeing my works published the world over?!
RELATED ARTICLES
album reviewalbum reviewsarts & crafts
8.0