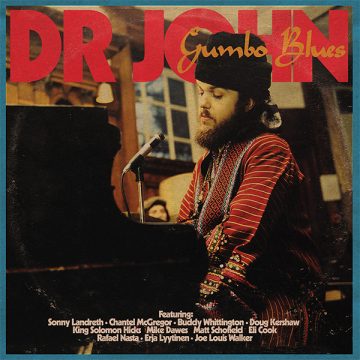 All make worthwhile, if not always strictly necessary, contributions–these were good tracks already. They should attract a younger audience and the association with the Doctor’s music should help the guests themselves too–older hands will enjoy revisiting familiar material in a slightly different setting. There’s plenty to enjoy here.

Norman Darwen grew up in north-west England admiring Elvis’ gold lamé jacket, Lord Kitchener’s way with words, and his much older brother’s and sister’s dancing to The Rolling Stones’ ‘Little Red Rooster’ on the telly. He’d wind aforementioned brother up by reading the entire contents of an R’n’B magazine he used to have to collect from his local shop for him and then reciting back as much as he could remember. Some years later he’d wind up his own friends by telling them who these people were that Led Zeppelin etc were covering – Willie Dixon, Howling Wolf, Otis Rush etc. These days he still listens to the blues, but has added a taste for reggae, zouk, rap, folk and anything else that takes his fancy…
RELATED ARTICLES
album reviewalbum reviewscleopatra records
9.0