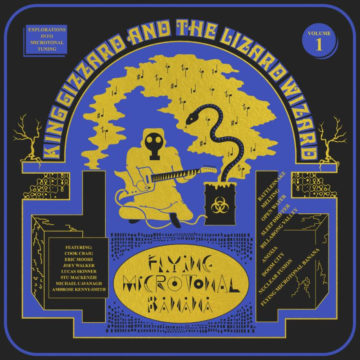 When a band seamlessly genre hops as much as King Gizzard does, it’s hard for one to categorize them. This is part of their allure. Since their formation seven years ago, they’ve dabbled in Garage Punk, Baroque Pop, Bossa Nova, Raga Rock, and of course Psychedelic Rock. Flying Microtonal Banana, their ninth and latest release, sees the prolific Melbourne natives throwing us yet another surprise, this time coming in the form of alternate tunings: microtonal tunings to be exact, which is essentially taking the regular twelve notes per octave and doubling it to 24. It is an unusual concept in rock music and Western music in general, but one that is frequently used in India and the Middle East. The outcome of this tuning you ask? It is nine tracks of psychedelic quirkiness.

Despite this radical instrumental move, the band seems a little more reserved here than on their previous LP, the explosive Nonagon Infinity. We’re not talking Paper Mache Dream Balloon laid back, but the tracks that King Gizzard have given us are a little more hypnotic and Middle Eastern sounding than we’ve heard them play before.

“Sleep Drifter” and the title track are both laden with Arabic style guitar riffs and are perfect examples of how the band has made these tunings blend with their own sound. Picture a cross between a ‘60s garage band and Omar Khorshid.

Tracks like “Rattlesnake” and “Open Water” have less in-your-face use of the microtonal tunings, and are more standard King Gizzard tunes, although the latter does have a slight Dick Dale vibe, albeit a tad more aggressive.

Like its predecessor, the tracks on Flying Microtonal Banana all seem to connect to one another without a break in between. In this case, however, the songs are all quite distinct, and one can easily tell when each song is over, whereas with Nonagon Infinity each track was based around the same riff.

Flying Microtonal Banana is the first of a reported five albums King Gizzard plans to release this year. In most cases it would be an incredibly bold move for a band to attempt such a thing, but if the next four releases are as good as this, we have nothing to worry about.

As a child growing up in the suburbs, Ryan found music as a way to soothe his boredom. After first hearing AC/DC at the age of 10, he was hooked on music. Tracing its roots to the ‘50s, he became obsessed with Elvis, Buddy Holly and Chuck Berry. Somehow that led to grunge, then psych-rock, then jazz, etc. The list goes on and on and his collection of vinyl records continues to grow.
RELATED ARTICLES
album reviewsato recordsflying microtonal banana
7.0