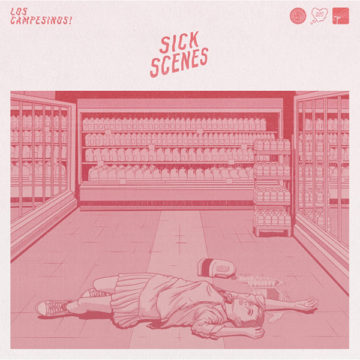 These guys are from Wales?  Really?  There is no way you would pick up on that fact  listening to this, their latest album.   This is their sixth album (for those keeping count) and their first since 2013’s No Blues.

I am not clear as to what this band has been doing in the four years between the albums, but musically they have picked up on the U.S. alternative music sound and adapted that formula to their music.  They have also added a new member (Matt Campesinos!) on bass  (all members have their last as ‘Campensinos!).

This is straight ahead, formula, alt-rock, meant for a certain market and if that is their goal, then they succeeded.  However, it does not make for an interesting album.

Where the album does get interesting is when they drop the ‘American’ sound and play their music their way.  It is also when their lyrics seem a bit more personal.  “Left your hometown for somewhere new, don’t be surprised now it’s leaving you” sings Gareth on the track “The Fall From Home” , and you know he is feeling every word and it does prove to be a very astute observation, especially with the band providing a suitable soundtrack.

The problem is the highlights come and go, some of the songs feel like filler.  The album rocks, and is well recorded/produced but not all the songs work nor does the album hold the listener’s attention throughout.  By the end of the album I found the last few songs kind of just ran together.

This is not to say fans will agree and I think their return will be warmly embraced, but for me, after six albums, and numerous EPs, it might be time for this band to begin growing and expanding for new sounds and new ways in which to express themselves.  Perhaps they can embrace the culture of Wales and incorporate that into their music.

Fans enjoy and rejoice, others, well this is not the album that will win over doubters.

Born and raised in Whitby, Aaron discovered music through his love of The Beatles. This led to a career in radio, writing for various publications, and ultimately a radio show about The Beatles (Beatles Universe), which ran for over four years. When not immersed in music, Aaron enjoys spending time with the loves of his life -- his wife Andrea, and daughters Emily and Linda (all of whom have an intense love of music too).
RELATED ARTICLES
album reviewslos campesinos!sick scenes
10