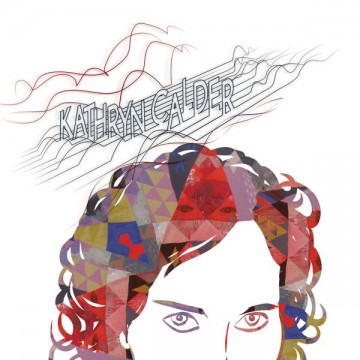 Kathryn Calder is the space between sentences, the calm before the storm, the tether that grounds the otherworldly personalities of her band The New Pornographers. Originally brought on to perform touring duties with Neko Case’s solo career blossoming, Calder became an indispensible foil to the enigmatic Dan Bejar, the blossoming Case, and the bombastic A.C. Newman.

Calder’s self-titled latest effort follows a familiar, if more robust and accessible, trajectory. Her records have all been touched a case of the melancholy. Gentle love songs hinge on the realization that the documented moments of euphoria will pass. Love and happiness, sadness and despair are all impermanent, subject to time and tide. This too shall pass. Hope swells in fits and spurts.

Kathryn Calder’s two opening tracks return to the best of her heavy-hearted balladry. “Slow Burning” is a hypnotic burner that allows Calder’s voice – her wispy, wanting, princess wood nymph voice – to explore her own nightmares in dreamy, ethereal synth-pop away from corporeal clutter. The bouncy “Take a Little Time,” however, boasts a hook worthy of the New Pornographers, and contrasts nicely with the placidly downtrodden numbers. The track hoists the record and introduces a new sonic think space for the artist – even if she dwells there for only a little while.

The remaining tracks stick to Calder’s comfort zone. Her voice elevates average material and her songwriting, which taps into a darker, shadowy corner of life, has always been a strength. Consider her 2010 record Are You My Mother?, which was written as she cared for her dying, ALS-stricken mother. Calder’s never been afraid of laying her soul and life’s greatest questions out on the page – and if you listen carefully, she might tap into your feels too. “When You See My Blood” provides some of the same subtext, devolving mysteriously into a distorted sonic soundscape, suggesting there’s never really an answer to all the questions she dares to ask in her lyrics.

“Clouds will shift and roll / We are carried on the air between us / Time will smoke us out but it’s really good / to see you here like this,” she sings on “Remembering,” the final track on the album. Even now, in times of relative ecstasy, she laments that an end is near. There’s always an end. Even if, for the moment, it’s just the end of a welcome record from an under-heralded princess of indie-rock. Kathryn Calder might never answer life’s questions or commit fully to the meditative synth-pop qualities of her best work, but there’s plenty here to broaden minds and willing ears.

James David Patrick has a B.A. in film studies from Emory University, an M.F.A in Creative Writing from the University of Southern Maine, and an honorary Ph.D. in bullshitting about everything else from the College of Two Pints. His fiction and non-fiction has appeared in PANK, Monkeybicycle, Squalorly, Specter Lit, and Bartleby Snopes among other wordy magazines. While he does not like to brag (much), he has interviewed Tom Hanks and is pretty sure you haven't. He bl-gs about music, movies, and nostalgia at thirtyhertzrumble.com and runs the James Bond Social Media Project at thejamesbondsocialmediaproject.com. James lives in Pittsburgh, PA.
RELATED ARTICLES
album reviewskathryn calderthe new pornographers
8.0