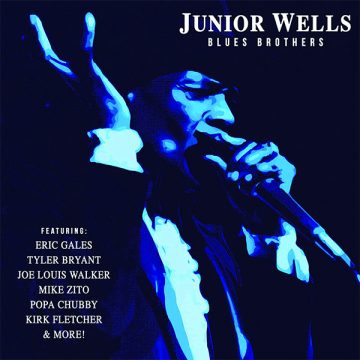 Blues legend Junior Wells was born in Memphis, Tennessee, in 1934 and died early in 1998. A powerful singer and master harmonica player, he played with many Chicago blues greats, sealing his status with his 1965 album Hoodoo Man Blues, though he has already attracted attention for his 1960 single, “Messin’ With The Kid”, which became his calling card. He frequently teamed up with another member of the new generation of the blues, one Buddy Guy, and they recorded many albums together, with some referring to them (much later) as “the original blues brothers”. They also hobnobbed with rock royalty–the two men toured with The Rolling Stones in 1970 and they recorded with members of The Stones a decade or so later; Eric Clapton also turned up on their album for Atco, recorded at the end of the ‘60s.

But time and the blues move on. Junior’s influence–he always was very much the contemporary performer–has not gone away however, and this release uses modern technology and both seasoned and newer performers to attract and keep a new audience for his music. The basic tracks are from Junior’s back catalogue, updated and made more palatable for modern ears with the addition of a bunch of today’s blues performers, people like guitar heroes Kirk Fletcher, Joe Louis Walker, Popa Chubby, Jimi Hendrix’s brother-in-law Guitar Shorty, Pat Travers, Eric Gales, Bernard Allison, young Tyler Bryant, and Colin James. The results are generally louder and more powerful than the originals, but they do keep the excitement, commitment, and energy that made these so good in the first place.

Junior was one of the pioneers of today’s blues and this setting definitely suits him. He would certainly have enjoyed it!

The Spill Magazine is a Toronto-based online publication dedicated to covering the independent music scene with a strong focus on our thriving hometown talent. Our writers bring you up-to-date news, in-depth features on musicians and reviews for the latest CD releases. We also travel to the front lines for all local festivals including Canadian Music Week and North by Northeast. Don’t forget to check out our Facebook and Twitter pages for all daily Spill updates.
RELATED ARTICLES
album reviewalbum reviewscleopatra records
7.0