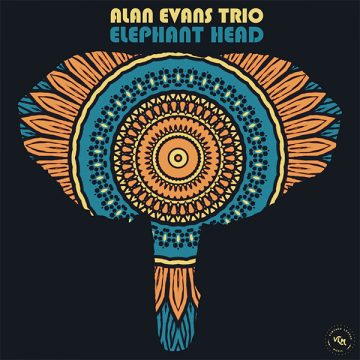 Following their 2019 album, The Wild Root, the Alan Evans Trio has returned with Elephant Head. The instrumental, organ-led, three-piece funk ensemble groove hard over their vintage soundscapes which are heavily reminiscent of ‘70s cinema and that of a Quentin Tarantino soundtrack.

Elephant Head opens with one of its strongest tracks, “Route 68”. It is a dirty blues song, accented by an instrumental hook which sounds like it should be used to back one of Motown’s top singers. The swinging shuffle groove of the song features a winding lead guitar, giving the loose sway of the song a Santana feel. This is followed by “Book It”, Evans’ attempt at capturing the tone of The Doors; however, the song seems to fall flat, feeling more like a tired cliché of psychedelia.

Where “Book It” may have fallen short, the album’s title track takes on psychedelic funk to a far more successful degree with “Elephant Head” sounding equally fresh as it does nostalgic. While some tracks on the record may feel more like loose jams and instrumental noodling, the Alan Evans Trio make up for it with their tight performance. All three members of the band perform with a refined sense of taste and sophistication. Across the eight tracks, “Route 68”, “Strangest Thing”, and “The Hitchhiker” standout as the strongest ones, each funky, cinematic, and very well-written, capturing a vibe from years long gone.

While Elephant Head may not the sure-shot that the Alan Evans Trio was anticipating, it certainly establishes the band as strong musicians. I cannot emphasise their incredibly tight performance enough; the Alan Evans Trio share a level of organic chemistry that few groups possess. That being said, Elephant Head seems to lean too much on the nostalgic vibes of the funky ‘70s and falls short of where it could have been.