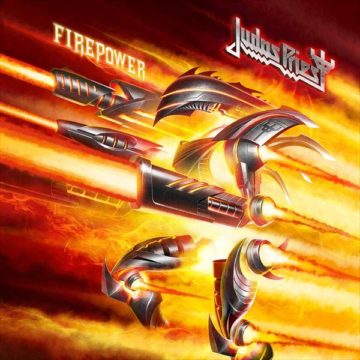 For their much awaited follow-up to their 2014 release, Redeemer Of Souls, metal pioneers Judas Priest have released Firepower, a fourteen track record that delivers some of the best songs Judas Priest has released in years.

Firepower opens with the title track and wastes no time to kick things up with a belting and unbelievably powerful and high-pitched scream from long-time vocalist Rob Halford. The song is blistering and sets a strong tone with a driving pulse that is beyond exciting. The following tracks, “Lightning Strikes” and “Evil Never Dies”, continue to lay out a heavy tone and while the pace has slowed from the up-tempo pace of “Firepower”, it is no less intense, especially the final chorus of “Evil Never Dies” which once again features Halford’s obscenely high vocals – a feat only more impressive considering his age of sixty-six years old – and a fiery guitar solo.

As the record continues, it is clear that Firepower is a throwback straight to the 1980s, the golden age of metal. This is both what makes Firepower so exciting to listen to as well as what holds it back from being something much more. Songs like “Never The Heroes”, “Children Of The Sun”, and “No Surrender” feel too reminiscent of the past making them fall on stylistic elements that feel a touch cliché and dated. That being said, the musicianship across the album – even these songs — is fantastic, and songs like “Necromancer”, “Flame Thrower”, and “Lone Wolf” are simply exceptional. While a small handful of songs on Firepower fail to push the envelope in ways that those previously listed do, this does not take away from the thrill of listening to Judas Priest kick ass once more.

Considering Judas Priest are a year away from reaching their fiftieth anniversary, Firepower, despite its flaws, is an unrelenting and hard-hitting record that pulls no punches, just as one would expect from a band who shaped metal and hard rock throughout their entire career, but most importantly in the 1970s and 1980s. Rather than sit quiet on their past accomplishments and put out a record that is merely good enough, Judas Priest has returned with a record that continues to exceed expectations. Firepower is an excellent record that further validates the legacy of Judas Priest in today’s musical climate as a band who continue to steer the course of metal as titans who show no signs of slowing down in the slightest.

A passion for music has always been a part of Gerrod’s life. As a young boy, he was raised on a steady diet of the music from The Chili Peppers, Aerosmith, The Stones, Prince, and others from his mum. Raised in the GTA, Gerrod continued to foster his love for music by attending a wide range of concerts and learning the drums. His unapologetic passion for music has no bounds and has spread to a wide variety of styles, whether it be the 90’s rock that sound tracked his teenage years, the jazz he studied in university, or his newfound love for hip-hop. He recently received his bachelors in music and education from York University and is passionate about writing and reviewing good (and less than good) music. Gerrod is also the drummer and songwriter for a Toronto based rock & roll band, One In The Chamber.
RELATED ARTICLES
album reviewscolumbia recordsfirepower
8.0