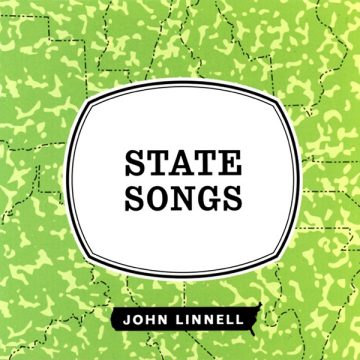 We have seen a number of reissues of late. These events usually coincide with a landmark anniversary of an album’s original release. Such is not the case with the expanded digital release of John Linnell’s 1999 solo album, State Songs. A 12th anniversary of anything is not exactly a milestone, so ‘why now?’, we may well ask.

For one thing, State Songs is a very cool record. Similar to his collaborations with John Flansburgh in They Might Be Giants, Linnell gives us something equally fun and unusual. His presentation is more direct, and has slightly less bombast than his famous band. Secondly, a digital reissue of State Songs is a nice little precursor to a new solo release from Linnell, due later this year, with a single set to drop in June. It will be interesting to hear new music from this artist.

It is worth noting that, while the titles of these seventeen songs come from the names of U.S. states, each song is not necessarily ‘about’ the state in question. The artist is simply using the name of the state as a springboard to creating each song. On first listen, we are reminded of the iconic quality of Linnell’s voice and production style. You can take the boy out of TMBG, but can you take TMBG out of the boy? This album is full of marvelously odd hook-filled songs with absurdist lyrics.

Stylistically varied, Linnell’s songs cover a lot of ground. The song “West Virginia” evokes songs by groups like The Zombies (complete with driving organ and psychedelic guitar), while “Montana” is a jangly mid-tempo power pop tune with REM-inspired chorus and counter-melody. The simplicity of “Pennsylvania”, with its accordion/violin/scat vocal arrangement, the colourful use of carousel organ on four songs, the pure TMBG-style fun of “The Songs of the Fifty States” – all make for an impressive, eclectic collection. The diversity of styles brings The Beatles’ white album to mind. In the case of State Songs, we hear a full-blown production followed by a snippet of a song, followed by a polka-style accordion song, which morphs into a marching band number with ambient parade sounds in its lengthy fade-out. With solid arrangements and musicianship, it is surreal and loony, without going entirely over the top.

State Songs is wide-ranging and weirdly wonderful. Certainly, fans of They Might Be Giants will love it, but everyone needs to listen to this. Go get it now.

Bryan Williston has been involved in music since he was a young child. A veteran singer, songwriter, and music educator, Bryan has enjoyed playing a multitude of musical genres in a variety of outfits, over the years. Bryan lives in Whitby, Ontario.
RELATED ARTICLES
album reviewalbum reviewscraft recordings
9.0