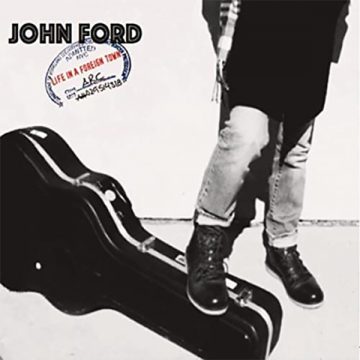 Life In A Foreign Town is John Ford’s first solo album since 2015’s A Better Day. It has been a while since we have heard from Mr. Ford, and he has been missed. He has been busy, performing live on his own as well as performing with the Strawbs in 2019. He also appeared on their most recent album, Settlement. Of course he was a member of Strawbs from 1971 until 1973, at which time he left with Richard Hudson and formed Hudson Ford. And for those keeping score, this led to the formation of The Monks in 1979. He has also established a very solid solo career, so a new studio album from him is always welcome news.

For the most part, Ford handles all the instruments. However, he does get help from his son, John Ford Jr. who provides lead and rhythm guitar on five tracks, Thom Thomson who provides the rock steady beat on drums, and string arrangements by Ray Random. Ford wrote all the songs, save for two covers, “Can’t Let Go” and “Another Tradition Broken”.

Ford is an excellent writer and performer. His voice is in fine form, and the time between albums has not negatively impacted his wonderful vocals. Here, the songs are rock with a little bit of folk infused into the mix. Ford, who now resides in America, but originally from London, England, sums up the feeling of loss with the title track “Life In A Foreign Town”, a beautiful and moving song that has a strong melody. Songs like “Back In England”, “Another Tradition Broken” and “Along The Way” echo the sentiments. The songs are very moving and extremely effective.

On “All Locked Down”, Ford approaches the subject with intelligent and witty lyrics centered around an incredible melody. The year was not lost on Ford, give a listen to “I Don’t Want To Hear It”, a wonderful protest song and commentary on the news of the world. Elsewhere he has fun with some straight rocking songs, such as “Tomorrow Never Comes”. One thing is clear, Ford has never sounded better and he does sound like he is having a great deal of fun, even with very serious topics.

All in all, a great album. 12 very strong songs, well-produced. This is an album, in the old traditional sense of the word. Each song compliments the last and as a whole it works wonderfully. To my ears, Life In A foreign Town is his best solo work. Ford demonstrates his ability to write incredible melodies and strong lyrics.

Born and raised in Whitby, Aaron discovered music through his love of The Beatles. This led to a career in radio, writing for various publications, and ultimately a radio show about The Beatles (Beatles Universe), which ran for over four years. When not immersed in music, Aaron enjoys spending time with the loves of his life -- his wife Andrea, and daughters Emily and Linda (all of whom have an intense love of music too).
RELATED ARTICLES
album reviewalbum reviewsjohn ford
8.0