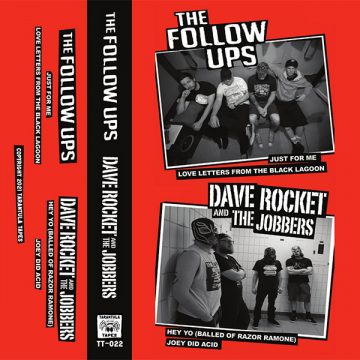 Moncton, NB’s  punk band The Follow Ups as well as Sarnia, ON’s Dave Rocket And The Jobbers have teamed up for a split album released on cassette via Tarantula Tapes. Previously issued on 7” vinyl by Faster And Louder Records earlier this year – it collects four songs, two from each band, to deliver yet another solid sampler from the Canadian punk scene.

The Follow Ups open the first half of the split album with a pair of tracks, “Just For Dave Follow Ups” and “Love Letters From The Black Lagoon”. The former opens the EP with a comical set of lyrics about why and who the song was written for, set over a fuzzy and distorted wave of guitars. “Love Letters From The Black Lagoon” takes the old-school punk energy and adds an entirely new dimension to the band with an acoustic track. As simple as the song is, it adds an extra layer of depth to The Follow Ups.

The second half of the album shines the spotlight on two tracks from Dave Rocket And The Jobbers. The first, “Hey Yo”, pays homage to the Ramones, following a similar chord progression and rhythmic structure to “Blitzkrieg Bop”, with lyrics that reference the band and members. The track kicks ass and sounds as if the Ramones were born out of the thrashing Los Angeles underground of the ‘80s and pumped ‘em full of speed rather than 1970’s New York City. The second track from the band, and closer on the release, is yet another acoustic track, “Joey Did Acid”. While the song doesn’t quite build on the excitement of a Ramones cover/spin-off song, it further shows the songwriting ability of Dave Rocket And The Jobbers, even with the simplest of progressions and lyrical ideas.

Canadian punk continues to be proven alive and well – just underground – thanks to yet another artist split from Tarantula Tapes and Faster And Louder Records. The Follow Ups look to be a grimy and fast-paced punk outfit while Dave Rocket And The Jobbers provide a heavier take on the classics. Ultimately, The Follow Ups/Dave Rocket And The Jobbers is a worthwhile showcase for both bands.

Dave Rocket And The Jobbers Links