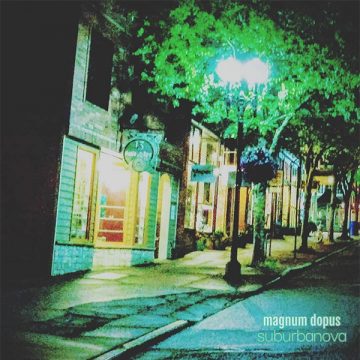 How do you characterize a rock music genre that goes under the title of goth, and where does it stem from? Of course, many would point to the 80s and bands that stemmed from the almighty New Wave, anybody from The Smiths (yes, The Smiths too) to Sisters of Mercy and quite a few in between. Actually, they all might be driving a line from possibly the king of goth, Jim Morrison.

From all those names, you may look at where the Tennessee-based quintet Magnum Dopus finds its inspiration for their second album Suburbanova.

Of course, drawing inspiration from certain music is one thing, but transforming it into something that is not just a mishmash of influences and is something that you can actually listen to is another.

Luckily for vocalist Andrew McCarthy and guitarist George Cole, they are able to transform all their Morrison/goth/new wave et al influences into a quite palpable mould out of which come some fully-formed, very listenable songs that actually transcend the sum of their parts.

Add to that the fact that Magnum Dopus actually prefer the more upbeat side of all the genres they love and turn Suburbanova into quite an enjoyable experience.