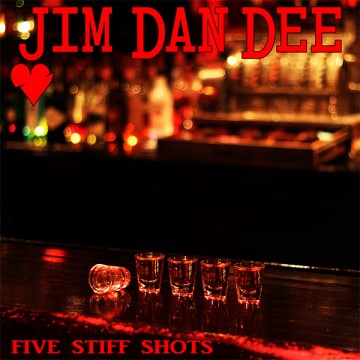 Along with some confessional lyrics and catchy hooks, Five Stiff Shots opens with with “F’ed Up,” which intros with a nice slide guitar before slapping us in the face with a kickass guitar riff to push the song forward. With background instrumentals reminiscent of Big Sugar, the simple arrangement of instruments on this track steers us in the right direction. Stefanuk’s voice is textured like Alan Doyle (Great Big Sea), and takes us back to the early ‘90s. Nostalgia points, check! A light, feathery organ intro presents itself in “Friends,” and we then get an earful of the sexy sax as an interesting counterpoint for this slow tempo song. “Friends” is a nice song to be listening to on a long drive to anywhere and you’d chuckle when you see each verse/chorus ending with the word or variation of “away” (yeah, I caught it, guys.). “Standing in the Window” and “Burn It Down” are simple, catchy tunes that showcase the band’s instrumentals (including an organ) while Stefanuk croons backing vocals. “Standing in the Window” is short (even though there was a bridge???) and leaves you wanting more, while the choice of guitar solo could have been more biting in nature. The interestingly chorded/titled, full throttled  “Chickie and the Toad” has some upbeat, adept guitar fingering as we hear a narrative about… well…Chickie and the Toad? The wah-wah pedal appears to trip us out through the psychedelic looking-glass as this song gives us . . . more . . . cowbell.

Jim Dan Dee’s Five Stiff Shots shows promise, and may not have the mainstream Top 40 appeal that the masses feel they need to hear, but this release doesn’t disappoint as a coalescing, generous portion of safe listening pleasure for a niche genre. They haven’t found their true potential yet, but hopefully they will expand on their sound and create more complex instrumentation to add to their wealth of musical knowledge as they give their fans and other music lovers more. The enjoyable tools are there; they just need some more honing.

Insert pretentious stuff about me here. I was born at a very young age. I am pretty, funny... without the comma. Easily distracte
RELATED ARTICLES
album reviewsfive stiff shotsjames stefanuk
8.0