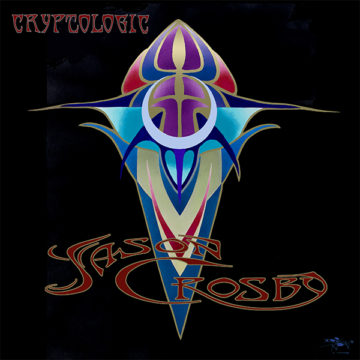 You may not know the name, but you do know his work. Jason Crosby is an in demand session artist who has played with more artists than he can remember. To name a few, he has worked with Blind Boys of Alabama, Dave Matthews, Eric Clapton and Santana, and that is just the tip of the iceberg.

Between playing with such huge artists, he does his own music. He is a multi-instrumentalist, so at times he can just play all the instruments. On Cryptologic, he does that for half the songs. Cryptologic is his first solo album since 2003’s Four Chords and Seven Notes Ago, though he did issue an E.P in 2010, And Dark Loft as well as a collaboration with Megan Palmer, You First, released in 2010. As good as those records are, Cryptologic really feels like a debut album. That is not to take away from his first solo projects, but here, he really finds his voice and has come up with a very solid album.

The album was produced by Karl Derfler, who has worked with Tom Waits and Dave Matthews.  Together they have assembled an album of songs that should not fit together, yet they all do. Even some of the songs should not fit as they do, yet they work. Listen to the lead off track, “Final Step”,  which at times sounds folk/rock, then soars into a Pink Floyd-like chorus. It is a brilliant song that, even with such comparisons, is still its own song.

Later in the album, Crosby breaks out into a full fledged rock star. Working with The Mother Hips as his back-up band, Crosby is able to cut loose and rock.  The songs with The Mother Hips are co-written with Tim Bluhm (The Mother Hips) and this adds a whole different dimension to the album. Listen to “Was I Ever There”, which has some blistering guitar playing and strong vocals from Crosby.

No doubt working as a session musician has opened Crosby up to many genres and styles of music, and he is able to drift between styles effortlessly throughout Cryptologic. There have been a number of session musicians who have become stars in their own right (Leon Russell, Ricky Skaggs, Steve Gadd) and have had, and continue to have long careers. Crosby can be added to that list.

The album, Cryptologic, by Jason Crosby is available now HERE.

Born and raised in Whitby, Aaron discovered music through his love of The Beatles. This led to a career in radio, writing for various publications, and ultimately a radio show about The Beatles (Beatles Universe), which ran for over four years. When not immersed in music, Aaron enjoys spending time with the loves of his life -- his wife Andrea, and daughters Emily and Linda (all of whom have an intense love of music too).
RELATED ARTICLES
. blue rose musicalbum reviewscryptologic

SPILL FEATURE: WHEN THE LIGHT IS RIGHT – A CONVERSATION WITH JASON CROSBY

by Aaron Badgley on October 5, 2017
WHEN THE LIGHT IS RIGHT A CONVERSATION WITH JASON CROSBY Jason Crosby has been playing music for almost his entire life. He started with the violin at age two, and from there he [...]