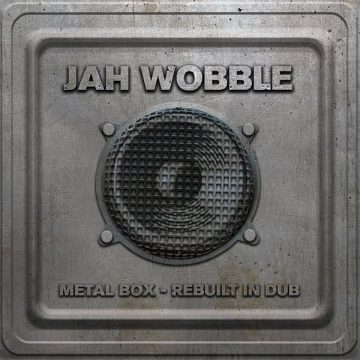 Jah Wobble formed Public Image Limited (P.I.L.) with John Lydon, aka Johnny Rotten, when Rotten had left The Sex Pistols in 1978.He then left the band he helped create after their second album, 1979’s Metal Box. Although it never made the top 200 in the U.S. and was a minor hit in the U.K., where it peaked at number 18, it has gone on to be recognized as a bona fide classic. Original bassist Wobble has returned to present a rather interesting version of it.

Fans of Wobble will know that ‘dub’ is nothing new to the bassist. He has released, remixed and contributed to a number of ‘dub’ albums and songs in the past, but what may be surprising is his desire to go back to an old P.I.L. one. But why shouldn’t he? Lydon has kept the P.I.L name and has had quite a career with that band, and to be fair he has released a number of great albums with that moniker. But here, Wobble has re-recorded almost all of the songs from the original plus a couple of songs from the first P.I.L releases.

In many ways some of the songs benefit from the dub treatment. There is no point comparing the two, as the original is a classic, and in some ways untouchable, but Wobble has made it magnificent with his interpretation of the classic record. For the most part, it is instrumental but vocals do pop up, particularly with “Poptunes” and “Public Image”, which is from the first P.I.L release.  For the most part, Wobble has arranged the songs to fit his style and his use of ‘dub’.

Metal Box — Rebuilt In Dub kicks off with the original opening track, “Albatross”, which sets the tone. Wobble brings out the melody here, and in some ways is actually more melodic than the original. He takes his time with the song and over the six and half minutes. It is beautifully arranged and is the perfect way to start. The same can be said for “Swan Lake”, once again he takes his time finding his way through the song. In the end it is a beautiful, almost classical dub mix of the original.

It is interesting that Wobble did not cover all of the songs on the original release. Surprisingly, “Death Disco” is not included, which one would think would be the ultimate song for dub. Perhaps it is far too personal to Lydon, so Wobble left it off out of respect to him. Although it is missed, there are other exclusions such as “Chant” and “Radio 4”.  However, the inclusion of “Public Image” and “Fodderstompf” are welcome additions.

Overall, Wobble has created a new album, while paying tribute to a classic one at the same time. That is quite a feat. He was not only there for the original but co-wrote the rerelease. He has lovingly and creatively tackled the project with a great deal of talent and creativity. Metal Box — Rebuilt In Dub is a truly a wonderful album, both the 1979 original and 2021’s rerelease.

Born and raised in Whitby, Aaron discovered music through his love of The Beatles. This led to a career in radio, writing for various publications, and ultimately a radio show about The Beatles (Beatles Universe), which ran for over four years. When not immersed in music, Aaron enjoys spending time with the loves of his life -- his wife Andrea, and daughters Emily and Linda (all of whom have an intense love of music too).
RELATED ARTICLES
album reviewalbum reviewscleopatra records
9.0