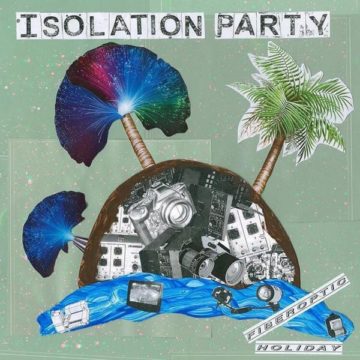 On Fiberoptic Holiday, Toronto four-piece Isolation Party come through with a tight collection of tracks that stands out amongst the vast seas of substanceless pop punk, but only boasts a relative distinctness. The influence from the West Coast scene is very apparent on this album, in the half-spoken vocals, energetic drums, and catchy leads, though Isolation Party combines it with a more modern Indie rock production style that gives it its own flair, which is best exemplified by tracks like “Dark Matter.” Not to mention the ever-so-subtle No wave influences, which manifest on other songs such as “Fine Lines” and “sleeves.”

This combination of styles produces a fantastic opener; however, the rest of the album often falls short. A lot of the performances on the album are unfortunately sloppy. The production of the album also hinders many of the songs – the vocals and drums on this album are often mixed far too loud in a way that only detracts for the energy of the performances. But the worst part about this album is that, despite the combination of influences, it often feels like a generic pop rock album, relying on overused rhythm melodies and uninteresting lyrics, like on the saddeningly bland “Disassociator.”

While Fiberoptic Holiday most likely won’t stand out for being an incredibly unique or interesting album, it’s certainly a step above what lots of Indie rock and punk bands are churning out these days.

Quinn Brown is a writer and total music nerd. He doesn’t have any social media, but you can reach him at quinnbrunerbrown2003@gmail.com.
RELATED ARTICLES
album reviewalbum reviews
7.0