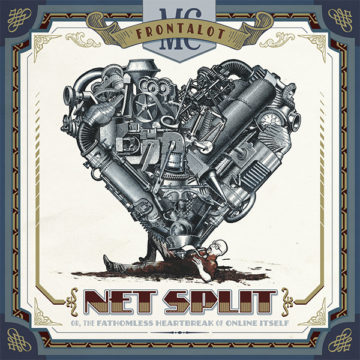 MC Frontalot
Net Split, Or The Fathomless Heartbreak Of Online Itself
Level Up

Damian Hess, better known by his stage name “MC Frontalot”, is a 45-year-old American rapper who just released his seventh studio album, Net Split or, the Fathomless Heartbreak of Online Itself. Here, the self-titled nerd MC Frontalot raps about memes and internet hate among other things found on the internet.

Listening to the album, it’s surprising how MC Frontalot manages to cram the entire EP full of internet references throughout the 43 minute duration. Not only does the topic get stale after the first song , but Frontalot continues to go down this cringeworthy path and expressses his anger towards the internet throughout the rest of the album with  “Memes Are Stupid”, “Never Read The Comments” and “I Hate Your Blog”. One gets the impression MC Frontalot is lamenting internet hate, but in reality he’s a 45-year-old man with self-esteem issues.

Though it’s not all bad, the lyrics flow within the beat nicely and the album is well-produced other than some questionable background noises and skips.

Overall, if you’re looking for a middle aged man to rap to you about why he hates the internet, than look no further, this one’s for you.