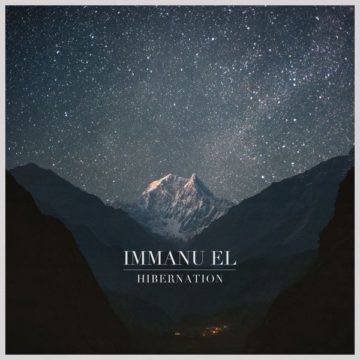 With so many bands trying to make it in this insanely competitive and difficult time for the record industry, it can be difficult to stick what you do best. It’s hard to make something you love while not giving in to what may be easier to sell. It’s tough to be patient. I have many great things to say about Sweden’s Immanu El, but what I love the most is how patient their music is. We’ve all heard the cliché  “Patience is a virtue,” but just because it’s a cliché doesn’t mean it’s not true. Patience is something this band needed during their nearly five year hiatus. However, the rest and recharging has paid off with the return of their new LP, and its clever and all too fitting title, Hibernation. It’s spacious and haunting, ethereal, emotional and serene. As their first full release after a recent signing with Glitter House Records, Hibernation is a pleasant whirlwind that is sure to make you weep and smile, possibly at the same time.

Thom Yorke once said, “I want to be alone and I want people to notice me — both at the same time.” This is something I understand when listening to records like Radiohead’s In Rainbows, Sigur Ros’ Kveikur, Vancouver Sleep Clinic’s Winter, and now, Hibernation. All too often, the beauty that loneliness and heartache can provide is overlooked. A song sounding ‘sad’ or ‘depressing’ has a negative connotation. Music, or any art form, is a release; a way of letting out emotions, calling out, and expressing oneself in ways that might not otherwise be possible.

The record’s first single and opener, “Voices,” begins slowly and sweetly with distant shining pads and guitar feedback. It builds into a heavy four on the floor pulse, like a magical beast slowly stomping up your stairs in the night. Its dreamy and romantic melody sets a clear tone that Immanu El have attached themselves to a league of brilliant Nordic acts like Sigur Ros. Next, “Winter Solstice” holds a heart-pounding drum groove behind Claes Strängberg’s ambient pop vocals: a driving upbeat track, and maybe the most pop forward one on the LP.

The album’s second single “Omega,” which has a wonderful video directed by Nicholas Livanos, has a long and steady build. Echoing guitar lines and pounding drums lead way into an explosive and uplifting climax which soar sky high until the end. As Strängberg told Ja Ja Ja Music, “Omega is about a personal revelation; feeling a connection with the eternal that gives a perspective on the temporary. Omega compliments the first single from Hibernation, “Voices”, nicely as it presents a more driven aspect to the sound of the Hibernation album. It has an energy and intensity that is in contrast to the ambience and depth of other songs and creates a dynamic shift in the album that we are very happy with.” Towards the end, “Hours” builds with delicate soundscapes and distant, falsetto vocals that suck the listener in. As the songs opens up, Strängberg drives through an uplifting vocal melody while the band holds strong with only a few tasteful and explosive hits.

This is music made for revealing the emotions of long, cold winters, snowy mountains and starry nights. Immanu El paints vivid descriptions of stories you can visualize as vocalist, Claes Strängberg, allows them to unfold through his lyrics. The slow and seductive work reveals a band that collectively knows how to write in a manner that makes each song come to life. The album is impressive and beautiful, full of enchanting harmonies and glimmering guitar and synth lines. All bias or exaggerations aside, Hibernation is worth everyone’s time. It’s polished and complete, impeccably but not overly produced, and most importantly, it’s a cohesive eight track collection. The album is a hypnotic and immersive post-rock statement, telling us that these Swedes are back. Although it is the band’s fourth album, it is a jumping off point that will surely put them in the know of lovers of bands like Hammock, Explosions In The Sky, and Tycho.

Watch the video for “Omega” below.

After majoring in business & entrepreneurship at UCSB and traveling the world, Andrew moved to Los Angeles to pursue music and not give up his love for surfing, hiking and yoga. He is also in a couple really cool, up and coming, indie-rock bands in LA - Mothlight & Lone Kodiak.
RELATED ARTICLES
album reviewsvoices
7.0